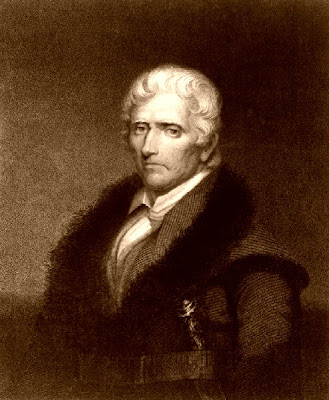 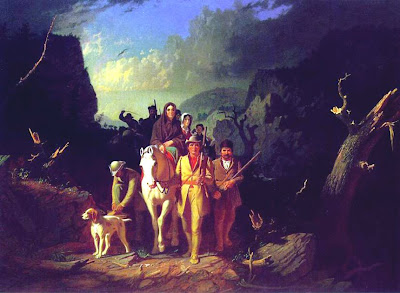 The picture at the top is the famous portrait of Daniel Boone at the end of his life in Missouri painted by Chester Harding from Boston in 1819. The second picture is the famous one of Boone leading men through the Cumberland gap and Boone’s Trace, the path he hacked through the wilderness to get to Kentucky. Notice no coonskin cap (a later invention of Hollywood and TV, if you remember Fess Parker). I have been enjoying reading Robert Morgan’s (a Tar Heel alum)fantastic, thorough, and careful biography of Boone, simply entitled “Boone. A Biography” (Chapel Hill: Algonquin Books, 2008). I relate to ole Dan’el because we both lived for long period in N.C. and Kentucky. The book inspired the following….

Moving, departing, going on ahead
Quitting, exiting, leaving it for dead
Forward, motion, progress in a line
Known for the movement, what you’ve left behind.

Straight as, an arrow, now the border bound
Face like a flint set, never looking ‘round
Heading, for horizon, always gathering speed
Horse and a saddle, all the things you need.

Go west, frontiersman, search for better land
Survey, explore, compass in your hand
Scratch the itch, the urge, for going yet again
Never returning, where you once had been.

Facing the sunset, heading now due west
Get there by sundown, or just do your best
Camping out, sleeping rough, now a daily deed
Finding the bluegrass, settling with all speed.

Marksman, surveyor, friend of Indians too
Tar Heel, Kentuckian, knew just what to do.
Boon to humanity, and all those he met
A Genuine American, few have equaled yet.

Quaker, hunter, lover of the land
Mason, commander, rifle in his hand.
Trapper, trader, family man and then,
Pull up stakes, and do it all again.

Born in Penn’s woods, died a patriarch,
Missouri the last frontier, but bluegrass in his heart,
Many came after, without succeeding him
Ole Dan’el the original, shan’t be seen again.