Blessed are the Martyrs who Die in the Lord Henceforth 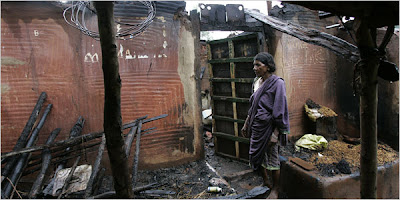 If you are at all a student of Christian history, you will know there have been numerous martyrdoms of Christians in every age of the Christian era. You don’t even need to consult a hagiographic work like Foxe’s Book of Martyrs to know this is true.

I was in Turkey two years ago when some indigenous Christians in the eastern part of the country were brutally murdered by their Muslim neighbors.

This week we have the report in the NY Times of similar murders in India by Hindus. Here is the link:

Christians are forced to renounce their faith in exchange for safety, or else face marytrdom. This has been going on for weeks in India, but our national news of course has hardly mentioned the fact. This ought to be stunning to us since India is the world’s largest democracy and officially a tolerant secular state. Hindus make up the majority of citizens in India, whilst Christians are only about 2% of the population or so.

The article goes on to say that in the eastern state of Orissa, “in Kandhamal, the district that has seen the greatest violence, more than 30 people have been killed, 3,000 homes burned and over 130 churches destroyed, including the tin-roofed Baptist prayer hall where the Digals worshiped. Today it is a heap of rubble on an empty field, where cows blithely graze.”

We need to pray for these folks, and for the cessation of the violence.