Is there A Christian View of Politics?

My friend James Howell, pastor of Myers Park UMC, always writes thoughtful columns on important subjects. Here is a recent one of his on politics.
—–

So what is the Christian angle on politics in America? Aren’t we supposed to buy into the conservative line, as we’ve been told for years? Or could liberals be onto something important? Or are they the ruin of everything we hold dear?

People ask me: are you liberal? or conservative? Sometimes my reply is: it depends on the issue – but my true answer is: neither! The Church drifts into absurd irrelevance if we do nothing more than baptize one or the other of the prevalent options society has dreamed up. We have our own perspective, which at times seems in sync with this or that policy – but then Bam! …we surprise everybody with a wrinkle, a twist. We are not middle of the road, although when we are most faithful to God we are likely to annoy (and occasionally to please) liberals and conservatives in equal measure.

How could this be? Human institutions, political parties, and even the noblest people who choose public service, are sinful, flawed; self-serving agendas get in the way, or the perils of the moment blind us to a greater good God would have us pursue. And frankly, not everybody out there is exactly “lost in wonder, love and praise,” deeply immersed in the Bible, and prepared to “take up your cross and follow” (Mark 8:34). Many citizens in both parties don’t think twice about God, or God is like a good-luck charm they think will help them get the goodies they crave. Politicans fawn over the electorate; they will “say anything,” and they even hire wizards to advise them on how to talk religious folks into voting for them. Parties and politics are not surprisingly out of sync with God.

We can see the wisdom, then, in John Howard Yoder’s words: “Jesus refused to concede that those in power represent an ideal or acceptable definition of what it means to be political. He did not say ‘You can have your politics and I shall do something else more important.’ He said, ‘Your definition of politics, and social existence, is wrong.’” Our intentions may be praiseworthy, and at times we rise to the occasion; there is so much that is marvelous and to be cherished in American life. But God quite mercifully calls us to something better than the inevitably compromised options of Democrat or Republican.

Tony Campolo has recently written about Red Letter Christians – those who take their cues, not from Rush Limbaugh or Michael Moore, but from the words of Jesus; no political operative can tell us what to think, for we are Christians, believing Jesus is the way. Red letter Christians can be Republican or Democrat – and hopefully both! They can and should be the “leaven” in the world; they “should be the ultimate swing vote, holding both sides accountable to a broader moral vision” (as Campolo wisely states).

There is always – always! – a “contrarian” bent to the Christian political angle. After all, in the Roman empire the complaint filed against Christians was “they are turning the world upside down” (Acts 17). In a world that does not love the Lord Jesus, we will expect to find ourselves at odds with business as usual; we shun a judgmental spirit, but we do not refrain from making judgments. “The Church is not simply a ‘voluntary association’ that may be of some use to the wider public, but rather is the community constituted by practices by which all other politics are to be judged” (Stanley Hauerwas).

Abraham Lincoln told the truth about “sides” who boast of God: “Both read the same Bible, and pray to the same God; each invokes His aid against the other. The prayers of both could not be answered… The Almighty has His own purposes.” Knowing this, we treat each other charitably, and look to God for something better: “With malice toward none; with charity for all… to bind up the nation’s wounds – to do all which may achieve and cherish a just and lasting peace, among ourselves, and with all nations.” 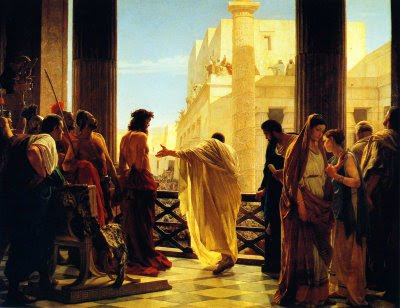