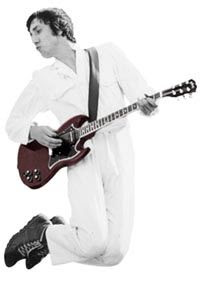 To these we must of course add quite a few others who could ‘bring it’ on any given night.

There are others who deserve honorable mention: 1)Leslie West; 2)The various lead guitarist of bands like AC DC, Queen, Journey, Collective Soul, Johnny Winter, Jefferson Airplane (not the Starship version), maybe Z.Z. Top, and though he was mainly a blues guitarist– Stevie Ray Vaughn.

Of the much more recent generation of guitarists Eric Johnson and Mr. Vai come to mind who could both ‘shred’ on demand.

As for the best albums featuring a lead guitarist, I would start with the best live (and remastered) album ever, bar none— The Who– Live at Leeds.

One listen to the amazing versions of Magic Bus and several of the others on this album and it is over. You ask yourself– Who were the other five guys also playing guitar in that band?

There are some performances by Jimi Hendrix that are right up there as well, but sadly no definitive live lp. The live performance of Carlos Santana at and after Woodstock performing material from the first lp and Abraxas ranks up there, as do some of the performances of Eddie Van Halen and Steve Howe.

As a guitarist, I have to say that speed is not everything. There were often complaints that Clapton could not play as fast as Townsend or Page or Hendrix, and they were justified. ‘Slow Hand’ was not slow, but he was slower than some, but his musicianship and facility could not be questioned.

If you had a ‘shred off’ between someone like Van Halen and Mr. Vai, it appears clear to me that Mr. Vai would win, but Van Halen is a better guitarist over all, and he is very fast indeed.

Hands down, the best tandem that played in the same band together over a considerable period of time were Allman and Betts when they played songs like Whipping Post at Filmore East.

But then there is the issue of style and creativity. Walter Becker of Steeley Dan was a very influential jazz-influenced guitarist and when teamed up with Larry Carlton those boys could hum. One has to also mention the MIT grad guitarist of Boston as well who was very creative and technologically well ahead of his time and one could add a classy Fender Stratocaster player like Jimmy Messina as well, though he falls into the folk and country rock slot.

Some bands had a BIG guitar sound, without actually having world class lead guitarists. I’m talking about bands like Poison, Guns and Roses, Def Leppard, Bon Jovi, Nickelback, and I could go on, but the subject of this post is LEAD GUITARISTS.

I once went to an all star concert fronted by Eric Clapton called Eric and Friends. Two of the friends turned out to be Duane Allman (who played with him on Layla), and Pete Townsend— YIKES!!! There were not enough amps in the world for that trio, and I went home deaf and happy 🙂

read next post
Britain is Repossessing America--- I'm John Cleese, and I approved this Message
archives most recent
More from Beliefnet and our partners
previous posts