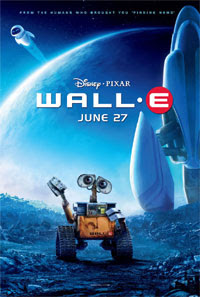 First I have a confession. I am a sucker for anything Pixar does. It’s almost gotten to the point where I feel like they can do little wrong. I’d go watch their version of a chewing tobacco or mortuary commercial. You catch my drift.

But there is good, and then there is better, and this little trip into outer space called WALL-E is better than good– its Pixar Perfect. The animation is great, the sound effects are great, the story is fun, but has a message that is not too preachy but makes its point.

It’s entertaining for children and adults, and it involves a love-story, AND it has a great new song by Peter Gabriel and the Soweto Gospel Choir! What more could you want for $5.00?

In a season of paltry and pathetic films, this one stands out like Venus the morning star. I even found myself shedding a tear now and then. If you don’t like the character of Wall-E (stands for waste allocation load lifter– earth class) by the end of the move you are a hard-hearted old son of a gun with spiritual hardening of the arteries. But I digress, a film synopsis is required, provided by our friends at Rottentomatoes.com.
—————

Academy Award®-winning writer-director Andrew Stanton (“Finding Nemo”) and the inventive storytellers and technical geniuses at Pixar Animation Studios (“The Incredibles,” “Cars,” “Ratatouille”) transport moviegoers to a galaxy not so very far away for a new computer-animated cosmic comedy about a determined robot named WALL•E.

After hundreds of lonely years of doing what he was built for, WALL•E (short for Waste Allocation Load Lifter Earth-Class) discovers a new purpose in life (besides collecting knick-knacks) when he meets a sleek search robot named EVE. EVE comes to realize that WALL•E has inadvertently stumbled upon the key to the planet’s future, and races back to space to report her findings to the humans (who have been eagerly awaiting word that it is safe to return home). Meanwhile, WALL•E chases EVE across the galaxy and sets into motion one of the most exciting and imaginative comedy adventures ever brought to the big screen.

Joining WALL•E on his fantastic journey across a universe of never-before-imagined visions of the future, is a hilarious cast of characters including a pet cockroach, and a heroic team of malfunctioning misfit robots.

Filled with surprises, action, humor and heart, WALL•E was written and directed by Andrew Stanton, produced by Jim Morris, co-produced by Lindsey Collins and features original and innovative sound design by Academy Award®-winner Ben Burtt (“Star Wars,” “Indiana Jones,” “E.T. the Extra-Terrestrial”). The film is due for release on June 27, 2008.

So then Wall-E falls for a girl who is, quite literally out of this world, and furthermore, her name is, not accidentally, Eve. The race of humankind is starting over– by means of, and by the intervention of two robots! Wall-E as it turns out is a pack-rat and an old romantic. He reminds me of my mom, in the best sort of way. He saves all sorts of things. He’s like Jeff Foxworthy’s definition of a redneck– someone who is attracted to shiny objects and brings them home and puts them up in the house! And its not an easy life for Wall-E, as besides compacting skyscrapers worth of trash, he has as his best friend some sort of cockroach. I ask you, if Pixar can make you sympathetic to the plight of a cockroach, obviously the sky is the limit with their powers–NO?

And indeed even the sky is not the limit in this movie, for suddenly after the first 20 minutes we blast off to the artificial realm of a space-station created by those wonderful folks at BUY N LARGE who want you to be buyin’ and want you to live and be large, if you catch my drift. The whole race of humans, having trashed the earth, has turned into Pillsbury Dough Persons living in outer space.

Yet it is not too late. All is not lost. Love, and a good exercise program may yet conquer all. Some of the space-station scenes are so meticulously crafted it reminds you of the Star Wars CG effects at their best.

But what of Wall-E and Eve? Will true romance lead to robot joy or only ‘Domo Origato, Mr. Roboto’? Will the earth ever be cleaned up and made fit for human habitation again? Will we ever get to see re-runs of ‘Hello Dolly’ and ‘Guys and Dolls’ again (which Wall-E has a special fondness for)? Or will we just be like those folks in the TV hit LOST– alive, barely, and goin’ nowhere? Inquiring minds want to know. So here’s a tip— DROP EVERYTHING AND GO TO THIS MOVIE AND BE SURPRISED BY JOY AND PATHOS. I promise, a good time will be had by all.

N.B. from BW3. Thus far the movie rates a 97% direct hit by the tough critics, who would not even give their own mother’s cherry pie a 97% rating and gets the same G (as in goooooood) rating as cherry pie. Its running time is well under two hours, and so as usual we have the delightful short subject up front, this one being called PRESTO about a really hungry rabbit and his magician master who wants to pull him out of the hat— BUT……

‘PACK UP THE BABIES AND GRAB THE OLD LADIES–THIS ONE’S A MUST. 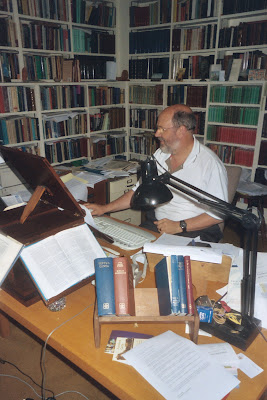