Dear America: a call to wake up

This is a time of mourning, for me. Of grieving for another America, one that we seem to have lost touch with in recent months (perhaps years…?). The America my father, my husband, my sisters and so many of my extended family & friends have fought for.

The America of the Statue of Liberty, whose beacon of hope welcomed ALL comers: the symbol of an America who trumpeted ~

“Give me your tired, your poor,
Your huddled masses yearning to breathe free,
The wretched refuse of your teeming shore.
Send these, the homeless, tempest-tossed to me,
I lift my lamp beside the golden door!”

Now, we seem riddled with the hatreds of a fearful people. We assume that it’s worth being unjust to all, just in case one person is unkind. Even dangerous. That was not the America I grew up believing in

And yet, it IS the America of pre-WWII. Americans roundly disapproved of allowing Jewish refugees fleeing certain death (hindsight being 20/20) to immigrate to the US. And it was race prejudice that led to the Japanese internment during WWII: military sources from the time period acknowledge that the Japanese American population presented little to no threat. In the history of American immigration, we have routinely denied admission to ‘lesser’ groups like the Irish, the Poles, Catholics & others ~ ethnicities who today are happy to endorse hate-mongers like Donald Trump, Ted Cruz, & others.

This is not my America. And with a substantive background in WWII history & literature, I’m deeply troubled by the similarities between today’s anti-Muslim rhetoric and the anti-Semitic rhetoric of Hitler, Mussolini, & others. To see this horrific deluge of fear & hatred clothed in religious vestments is even more saddening. And terrifying, as well.

In the post-Civil War era, many ostensibly Christian demagogues have cited religion as a basis for racism. Highly credible legal sources have jumped on board, citing only their own opinions (roundly racist) as grounds for totally racist injustice. As recently as this week, Justice Scalia asserted that at least one ‘benefit’ of returning to pre-affirmative action educational policies is that blacks shouldn’t go to “lesser schools where they do not feel that they’re being pushed ahead in classes that are too fast for them.” Really??? Black Americans should go to “lesser schools,” Mr. Scalia? (I refuse to dignify such a racist comment w/ a respectable title Scalia obviously doesn’t deserve.)

And yet it’s a month of several holy days, for multiple religions. There’s Hannukah, familiar to most Americans. And Rohatsu, or Bodhi Day, sacred to Buddhists as a celebration of the Buddha’s awakening. There’s pagan & Wiccan Solstice; orthodox Christian Advent; Mawlid el-Nabi, the birthday anniversary of the prophet Mohammed. And there is  Zarathosht Disoj, the death of the prophet Zarathustra. In November, a few weeks before Thanksgiving, there’s Diwali, the Hindu Festival of Lights.

In other words, no one spiritual tradition ‘owns’ a month. And all religions — despite what some extremists of many faiths may argue — honour peace and love. Islam is no more a religion of violence and hate than Christianity is. If you look at the Christian white male murderers, there are far more of them in the US than there are Muslim terrorists. But we aren’t even banning guns for people on the no-fly list: we would rather pretend it’s ‘someone else, someone brown.’

I am heartsick that I must worry for the sons of friends. Sons who are Muslim, sons who aren’t Muslim, but ‘look different’ (re: brown). I am terrified that this state where I have spent so many years — the reddest of red states — will once again succumb to a crazed killer, as it did in the Oklahoma City bombing (perpetrated by a ‘nice quiet’ white boy, a veteran, even). Every day, a ‘respectable’ American leader (I use the term loosely) calls for more extreme ‘proactive’ measures against other Americans, asking that we implement a ‘list’ of Muslims in the US, for instance. Asking that we forbid immigration of all Muslims, including those Americans currently abroad. Asking that we perpetrate profound injustices against our fellow Americans, as well as refuse safe haven to families, the safe haven that has been one of our worthiest American freedoms.

Does no one else remember the Nuremberg Laws??

Here is my sincerest hope: that America will wake up, as the founders of our many wisdom traditions did. That we live the kindness, the wisdom, the respect & compassion at the heart of each of our spiritual centres.That we find within our American history not bloodthirsty fear and hatred (there’s been plenty of that), but instead turn to the hope of that loveliest of American symbols, the welcoming bright light of the Statue of Liberty.

And let us work hard so that this dark night of the American soul passes. Soon. 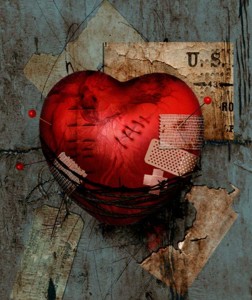 another day, another tragedy...?
archives most recent
More from Beliefnet and our partners
previous posts