When I hear of the serial murder sprees — all done w/ guns — that plague America, I think of my sons. Not always first, but always. Probably too self-referential, I identify with the mothers of children slaughtered in Sandy Hook, executed in Umpqua, annihilated in Charleston. Who ends a phone conversation with a son or daughter off to school wondering if s/he will return home? Who lives that way?

Not I, certainly. Sometimes I’m brusque w/ my sons — not very often, but no one’s perfect (neither them nor I!). When my sons were in school — from elementary to grad school — there were mornings/ phone calls/ conversations when ‘teaching’ took place. And sometimes that means raised voices, less than nurturing words. What if one of them had not survived that specific day? What if our last words had been heated, even hard? How would I live with that??

But I also grieve for the mothers of the murderers, because even murderers have mothers. And how do we live with THAT: the grief, the horror, that a beloved child left carnage in his wake? Many of these young white male killers (and 79% are exactly that: white and male) have histories of mental illness — violent mental illness, to distinguish them from the far more common mentally ill who would never do such things But many are NOT mentally ill by the American Psychiatric Association’s (APA) DSM definitions. Many years a 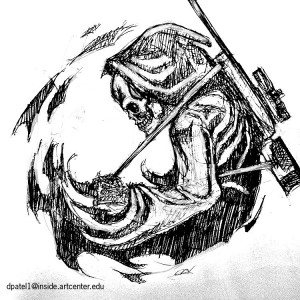 go, when I was a medical reporter attending a national APA conference for journalists, I remember a high-up psychiatrist reminding us that evil exists, and it needn’t be ‘crazy.’ That most ‘crazies’ can barely function, and certainly can’t plan complex slaughters.

If these were brown boys butchering people (and I often wonder why more brown men don’t retaliate with violences against racism), there would be a national outcry. Much like the privileged white response to #BlackLivesMatter, which refuses to see any white culpability in the war on black men that white America is winning. Instead, American leadership on the right is saying ‘stuff happens,’ and arguing there is nothing to do but arm more people. Or tender prayers that seem to be a reflexive response, generating sound against the fury of massacre. The 45th this year — more than one a week. The death of our children has become so commonplace that it’s a more-than-weekly occurrence.

This mother is NOT accepting prayer as a viable alternative to reasonable gun legislation. As the daughter of a hunter & Army lifer, the sister of an Army lifer, the wife of a hunter & Việtnam Marine vet, I don’t want all guns done away with. They’re useful for hunting, and fun for target practice. And I don’t want us to engage in yet more raging finger-pointing instead of civil discourse. ALL of us want our children safe, surely. What I want is simple: sensible regulation that will stop these horrific bloodbaths from happening.

Because I want to stop wondering when mothers everywhere will be able to send their children to school and be pretty certain they’ll return. I want my teacher friends to not have to practice ‘intruder alert’ drills, terrifying themselves & the young lives charged to their protection. I want someone, somewhere, to MAKE THIS STOP. And I suspect, in my aching beginner’s heart, that WE — the mothers & fathers & grandparents & families of children of all ages — are it. So be it.

pebbles, lobsters, and priorities
archives most recent
More from Beliefnet and our partners
previous posts