the names of the dead are ghosts

A couple of weeks ago I upgraded my phone. Which meant shifting contacts. And as there was a major update on my desktop as well, it seemed a good idea to go through my directory. Because people die.

And it takes YEARS before I can bring myself to ‘delete’ them. And yes, I realise they’ve already been ‘deleted.’ That their names, without phone reception beyond the grave, will never again respond to a call, to a note, to anything at all. I really do get all that.

Perhaps because I moved so often for so much of my life, I have an I just haven’t seen them recently default. So my dearly lamented friend Carol is really just out-of-pocket, not disappeared completely from my life. And Larry, who watched me grow from a giddy 18-year-old to a still giddy, but at least more literate, mother of 2 grown men…? We just aren’t good correspondents. Same with Judy, who sent me cookies & green tea from her time teaching in Japan.

None of them are really gone, I delude myself. Just… hung up doing stuff, as we all get.

But the truth is that death is, at least for me, an ending. Not a religious beginning, as it is for some. I don’t know what does happen when we die, but as far as I can tell? No one has come back to touch base. Unless you count my own dreams, which I don’t trust at all…. 😉

So I try to assuage my griefs by telling the friends & family I still have how much I love them (my elder son accused me of being ‘gooey’!). I warn them mushy moment, and try to be as specific as possible. They roll their eyes, and a few (you know who you are!) give me a hug. Mostly they roll their eyes…

But I know this: that someday, their names will be ghosts in my address book, my contacts file, my cell directory. And I will have to figure out if I’m ready, yet, to do that oh-so-Buddhist ‘letting go’ thing. This time — years after I lost her — I laid Judy to rest, and Larry. Carol, however… Carol is still just out of touch for a while. I can’t quite bring myself to acknowledge we’ll never ride the bus again, and giggle about the characters we meet.

My advice to you? Take time to talk to the folks you love. They really aren’t invincible, nor immortal. But love, that pseudo-fragile winged creature, almost is. It’s just that there’s no one — even when the ghosts linger in names — to hear our hearts beat at its behest. 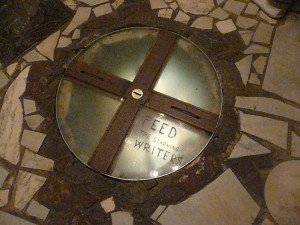