moving toward light: opening up and letting go

Photographers have a term for when there’s not light to shoot a picture. It’s called ‘opening up’: you increase the aperture — the hole through which you shoot the picture — to allow more light in. Otherwise, you get a dark picture. The problem w/ opening the lens up is that you have to hold it much steadier, or you get a blurry picture. It used to be — in those long-ago, analog days — that you could buy film for such predicaments: so-called ‘fast’ film, that meant you wouldn’t have to open the aperture up so much, so you wouldn’t need a tripod (or the steadiest of hands!). Now? It’s digital, and you use tripods. Or flash. Or just blur.

Here’s where you have to bear with me: my beloved mother-in-law is opening up. As she moves toward her final days — however close or distant — she is letting in more and more light. This isn’t always pleasant for those around her: her veneer of politesse (a very thick one, previously) is wearing a bit thin. She wants what she wants, and perhaps it’s her sense of time passing very quickly that underlines how much she needs it NOW. She is both stronger and far far more fragile, standing up for herself in areas where she used to adapt to the wants of others (husband, children, friends). But also terrified of solitude, this woman who could sit for hours on her porch, watching birds.

Now she often forgets my name, although her face still lightens when my beloved and I appear to her. If she’s sleeping, she has the child-like happiness of a surprise that’s given her. Awake, she may ask where we’ve been…:) For her, the pictures are blurring as she opens up: names float away, and only the immediate now matters.

My beginner’s heart is glad to see her so open to the world, but I also worry about her. Having watched my own mother cross whatever threshold lies between here and wherever, I’m aware that her absence (even though she is so often ‘absent’ now) will hurt deeply. But I also know I am watching life w/out pretense, w/out protection. Mom is what she is, and she’s only (but also so MUCH) that. Mom is — as always — teaching me: how to let go, how to live in the now.

Time passes, and the light remains. You just have to open to it. Even when it hurts. 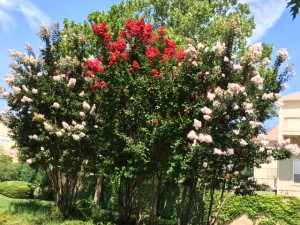