I use this image alot in my blog. I wish I knew who first created it — they deserve my undying admiration & gratitude. Because to me, this is beginner’s heart.

It’s what I think of these days, especially, as I try to make sense of my own anger, frustration, and even despair. Anger at the blindness of a white, heterosexist, ersatz Christian culture. Frustration w/ a system of police ‘protection’ migrated from a war on terror, as if wethepeople were the enemy. And despair that nothing has changed since the riots of the 60s…

Today, however, a dear friend and colleague — someone I have nothing but respect and affection for — reminded me that there is more to Ferguson than my raging against the night. There are people who live there, w/ children who can’t go to school.

Children who will need counseling to get this past week out of their nightmares. A QuikTrip that may not be rebuilt, in a neighbourhood with — almost certainly — too few sources for shopping.

And still, I don’t know what to think, or how to process. So I SWORE I wasn’t going to do FB today, or tomorrow. The tragic, racist, thoughtless and downright HATEFUL posts about Ferguson and the other murders of black men & women this past month have me too upset & angry.But to be honest, it’s not strictly Ferguson. It’s a society that believes the death of a black man is ‘collateral damage.’

I understand that the officer in Ferguson may have been afraid. But face it: he did NOT know (at that time) of the robbery, if indeed there was one. So basically, he hassled a guy for living while black, and then freaked out because he bit off more than he could chew. In the BEST of scenarios, the officer is still grievously at fault: he hassled a guy for being black and jay-walking.

I’m just sick of it all. When I go out to eat w/ my (black) friends Ben or Dewayne, it’s SOOOO different than when I go out w/ my husband, or my brother-in-law. Race is such a painful, horrible legacy in this country, and I don’t know what to do except remind people, as often as it seems necessary, that we need to talk.

The response in Ferguson was waaaay out of proportion. And sure: parties on both sides are making political hay out of it. Witness the St. Louis PD, the KKK, the SLPC, etc. I tend to agree that it’s no different, essentially, from the 4-5 other murders of black men & a woman this past month. That doesn’t comfort me.

Somehow, we all have to find a way to heal these grievous wounds. And frankly? I can’t begin to heal myself, and no one has shot at me, profiled me, beat me up, or shot my son. So how on earth can Ferguson ever come to peace…? 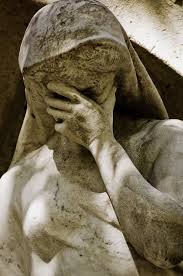 heartsickness, the '60s, and Ferguson MO
archives most recent
More from Beliefnet and our partners
previous posts