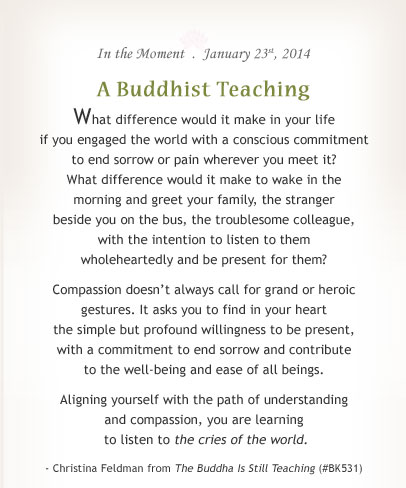 In keeping with the 30 Days of Love project, I’m thinking about how it works with my own beliefs, with Buddhism, specifically. As many faith traditions do, they intersect in many productive ways.

Engaged Buddhism fits well with the theme of today’s 30 Days of Love blog post, for instance: voting rights. I have stood on street corners to protest war, cranked out handbills against corrupt politicians, and written countless letters, blog posts, and emails. These days, I do less of that kind of engaged Buddhism and more of this kind. I do what I do best: write. And today, in addition to considering the larger picture of voting rights, I wonder what would happen if we listened to each other.

The 30 Days of Love effort is about social action on the larger scale, a critically important project. I remain true to the smaller scale, however, as well. As Christina Feldman asks in the picture, what difference would it make…to listen …wholeheartedly and be present?

Imagine if the politicians who are so wrapped in hate and moral superiority — and Sheriff Joe Arpaio comes to mind — were able to listen. Were able to empathise. Because it seems to me, in my confused attempts to understand people like Arpaio, that they lack empathy for people unlike them. My family who pray for the death of Obama, for instance, are able to bring enormous empathy to the plight of animal rescue, but not to the children of undocumented immigrants.

It’s hard to listen. I spend more time than I should on a friend’s FB page, trying to understand why HIS family believes as they do. Have I learned anything? Yes, actually: I’ve learned that science is suspect in many conservative communities. ANY science, not simply the science of, say, evolution.

But I continue the conversation, asking why (for instance) 30,000 degree-holding Americans should trump the 98% of scientists around the world who agree that global climate change is a crisis. 30,000 Americans is a very small drop compared to 98% of the world’s scientists. And yet, in my friend’s cousin’s mind, the 30,000 stand for HIM. Which I have learned only through listening.

He also believes that undocumented immigrants steal jobs. And use social services. Research from anyone other than extreme right-wing media and demagogues (Rush Limbaugh, anyone?) is suspect. And he is convinced of voter fraud, even though the only systemic instances have been Republican (Virginia & Florida).

Has my conversation with him helped? Either of us? I can’t speak for him, obviously. But I do know it’s made me understand my own family a bit better. Which is something, I suppose — out of understanding may grow more compassion. 🙂

For now? I’m trying to groun my Unitarian social activism/ engaged Buddhism in my Buddhist  compassion. That’s ‘s my project during these 30 days of love. And it’s harder than I could ever have imagined.

30 days of love: hot curlers, love, and doing for others
archives most recent
More from Beliefnet and our partners
previous posts