self-love and the Golden Rule – 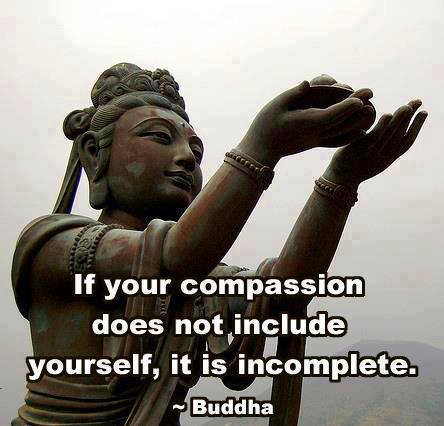 And another ‘secret’: most of us DON’T treat ourselves as we would a friend. We say mean things to ourselves (you are SO fat! how STUPID are you?? what were you THINKING??). Hurtful things we would never utter to a friend. Maybe not even to someone we didn’t like!

One of the (many) reasons I think of myself as a Unitarian Universalist is that Universalists believe NO ONE goes to hell. Not even… Hitler! Because if people can forgive (and in this case? Think of Sister Prejean — Dead Man Walking — for an example of saintly forgiveness), surely an omnipotent One is capable of even more. Of maybe even wiping clean the evil and beginning w/ a clean heart. Who knows?

I have no idea what went on in Hitler’s mind, or what goes on in the mind of a man who would pull a pink headband off the head of a 2-year-old boy, and swear at the boy and his mother. A minor evil, certainly, compared to the evil overlord, but still evil. But I can forgive a man so threatened by homophobia that he takes it out on a toddler, even as I wonder what the heck is wrong with him.

But can I forgive myself the many times I’m unkind? The many days I’m tired and cranky, and snap at my damn-near-perfect husband? How about times I explode at politicians, and ersatz religious leaders who advocate hate & hostilities? Because if I can’t forgive myself for these infractions, as a friend told me recently: they will work themselves inside you, and you will see them everywhere.

Since I DO — waaay too often! — I am resolved again to work harder. Be it resolved: I will treat myself more kindly.

That does NOT mean I will lower my standards, however. Just that I won’t beat myself when I (inevitably!) fail ~