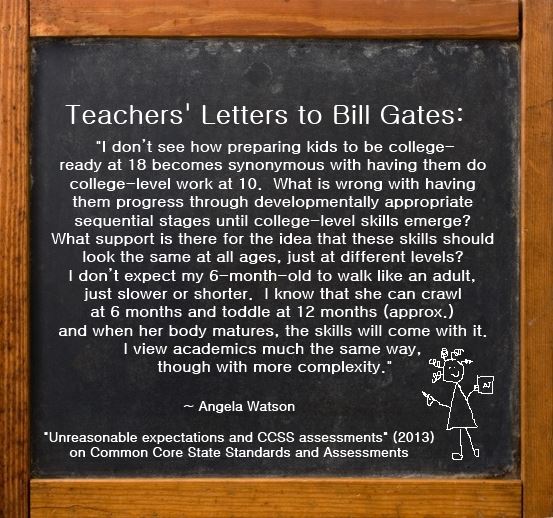 My grandson is only a week old. I can’t expect him to do much of anything yet. Eat, eliminate, emote. That’s about it.

No amount of trying on my part will enable him to do what even a one-month-old can. And people would think I was nuts if I asked him to walk. 🙂

But that is, as Ms. Watson makes very clear, what we’re doing every day with our ersatz ‘standards’ of education. Children aren’t cars. Heck, even cars have idiosyncracies! Even a new one is not like another kind of car. So: are all our kids… VWs? Priuses? What about a kid who might be a Ferrari? Or…a Tata (look it up).

Children of 8 cannot do a dumbed-down version of what a student of 18 can do. Can both work w/ numbers? Sure. But you can’t just say an 8-year-old can do a different version of calculus. It doesn’t work that way. Nor can an 8-year-old look at history the same way a 18-year-old can.

No one would suggest that we tell the gruesomest details of the Holocaust to an 8-year-old. Or that an 8-year-old even read Anne Frank, which is silent on what comes after. Children have different maturity levels, as well as focus capabilities. Brain-based research on how we learn discusses these different focus windows — significantly shorter for  8-year-olds than 18-year-olds. And different for boys and girls, even of the same ages. And different for kids who’ve been fed and kids who haven’t… Learning is not the cookie cutter application of information.

What Gates, Duncan, and many other ‘reformers’ seem to believe is what Paolo Freire labels the banking concept of learning. You have this empty piggy bank of a kid in front of you, and you just deposit the coins of what you know into his/her brainbank. If only it were that simple… (And even THAT model would have to contend w/ retention… banks do go BROKE.)

Learning is constructed. From what we learn previously, from input, from raw data that is NOT knowledge. From application of theories. From critical thinking. And the ability of an 8-year-old to think critically is not nearly as developed as that of a 16-year-old. Or an 18-year-old. Common Core (and its proponents) would like us to believe that all we have to do to prepare a child for college is give that child dumbed-down college prep curriculum (written not by the teacher of the student in front of him/her, but by ‘experts’).

And this is about beginner’s heart how?

When we ask our children to do the impossible, we doom them to failure. WE are the reason our children drop out of schools, voting with their feet against schools that require them to sit impossibly still, learn things that far too often seem unrelated to their lives. Last year, on the average, one in four (yep — 1/4 of) American high schoolers did not graduate. And given the way my state defines ‘drop-out,’ I’m skeptical the number isn’t significantly higher (certainly it’s 60% in many urban schools). We only measure those students who begin HS. If we lose a student earlier — and many drop out in 8th grade — s/he is NOT counted as student for graduation metrics.

What can we do?  As teachers, as parents, as good citizens, as people who believe in social justice (life without a diploma is a sentence, for most students…)?

I don’t know — I only have questions. And one of them is this: who really believes that treating 8-year-olds like short 18-year-olds is a good idea? 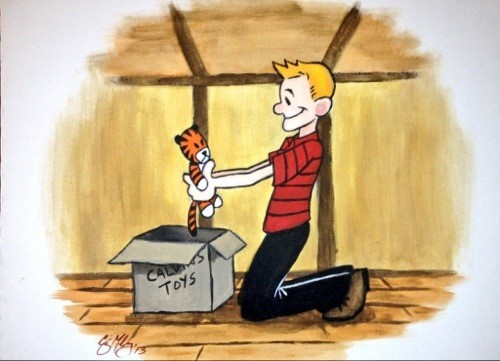 that was then, but this is beginner's heart ~
archives most recent
More from Beliefnet and our partners
previous posts