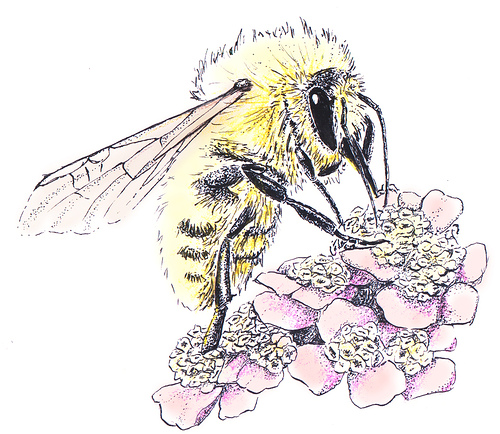 The poet Mona Van Duyn is another favourite. This is one of hers I hadn’t known previously — I actually was looking for another poem when I came across it. Being a sucker for bees (my first name, as many readers know, means ‘the bee’; my family might even go so far as to say I think it means the QUEEN bee…), I had to include it in this month’s line-up.

Van Duyn wrote all her life, even met her husband — another poet, at the time — at a writer’s workshop. Her poetry is deceptively quiet. It will sneak up on you. 🙂 She writes about everyday life: marriage (her poem ‘Late Loving’ is the one I was trying to find a copy of online), loneliness, friendship, aging. I think of her as very Buddhist, although I have no idea what — if any — spiritual tradition she followed.

A Time of Bees

Love is never strong enough to find the words befitting it.
CAMUS

All day my husband pounds on the upstairs porch.
Screeches and grunts of wood as the wall is opened
keep the whole house tormented. He is trying to reach
the bees, he is after bees. This is the climax, an end
to two summers of small operations with sprays and ladders.
Last June on the porch floor I found them dead,
a sprinkle of dusty bugs, and next day a still worse
death, until, like falling in love, bee-haunted,
I swept up bigger and bigger loads of some hatch,
I thought, sickened, and sickening me, from what origin?
My life centered on bees, all floors were suspect. The search
was hopeless. Windows were shut. I never find
where anything comes from. But in June my husband’s fierce
sallies began, inspections, cracks located
and sealed, insecticides shot; outside, the bees’ course
watched, charted; books on bees read.
I tell you I swept up bodies every day on the porch.
Then they’d stop, the problem was solved; then they were there again,
as the feelings make themselves known again, as they beseech
sleepers who live innocently in will and mind.
It is no surprise to those who walk with their tigers
that the bees were back, no surprise to me. But they had
left themselves so lack-luster, their black and gold furs
so deathly faded. Gray bugs that the broom hunted
were like a thousand little stops when some great lurch
of heart takes place, or a great shift of season.
November it came to an end. No bees. And I could watch
the floor, clean and cool, and, from windows, the cold land.
But this spring the thing began again, and his curse
went upstairs again, and his tinkering and reasoning and pride.
It is the man who takes hold. I lived from bees, but his force
went out after bees and found them in the wall where they hid.
And now in July he is tearing out the wall, and each
board ripped brings them closer to his hunting hand.
It is quiet, has been quiet for a while. He calls me, and I march
from a dream of bees to see them, winged and unwinged,
such a mess of interrupted life dumped on newspapers—
dirty clots of grubs, sawdust, stuck fliers, all smeared
together with old honey, they writhe, some of them, but who cares?
They go to the garbage, it is over, everything has been said.
But there is more. Wouldn’t you think the bees had suffered
enough? This evening we go to a party, the breeze
dies, late, we are sticky in our old friendships and light-headed.
We tell our funny story about the bees.
At two in the morning we come home, and a friend,
a scientist, comes with us, in his car. We’re going to save
the idea of the thing, a hundred bees, if we can find
so many unrotted, still warm but harmless, and leave
the rest. We hope that the neighbors are safe in bed,
taking no note of these private catastrophes.
He wants an enzyme in the flight-wing muscle. Not a bad
thing to look into. In the night we rattle and raise
the lid of the garbage can. Flashlights in hand,
we open newspapers, and the men reach in a salve
of happenings. I can’t touch it. I hate the self-examined
who’ve killed the self. The dead are darker, but the others have
moved in the ooze toward the next moment. My God
one half-worm gets its wings right before our eyes.
Searching fingers sort and lay bare, they need
the idea of bees—and yet, under their touch, the craze
for life gets stronger in the squirming, whitish kind.
The men do it. Making a claim on the future, as love
makes a claim on the future, grasping. And I, underhand,
I feel it start, a terrible, lifelong heave
taking direction. Unpleading, the men prod
till all that grubby softness wants to give, to give.