I can’t stand my  next door neighbour. There. I said it to the thousands of people who may read this. But it won’t be him, because he doesn’t seem to read much… And yes, that sounds horribly snarky. But really? He doesn’t.

While Mr. Neighbour’s purple martin house does face an open area, it’s a street. With a lot of traffic. Not where you’d expect to have a lot of purple martins. Nonetheless, he has put up three ‘songbird/English sparrow/ starling traps’ (I looked them up online) around the pole supporting the martin house.

True confession time: I let a sparrow out yesterday. Walked over, brave as brass (as my grandma would have said), and popped open the lid. The sparrow had been there several hours, in the hot Oklahoma sun, beating frantic wings against the wire trap. I had hoped that someone else would free it, one of the many  joggers who run down our street, 6′ (or less) from the martin house. No such luck.

And of course that’s my point. Don’t we often do this? Hope like hell that someone else will do what we know needs to be done? From something as minor (although not to the sparrow, of course) as freeing a live-trap, to recycling, to living more simply, to standing up against injustice. And that’s what live-trapping sparrows is, in my none-too-humble opinion. An injustice. 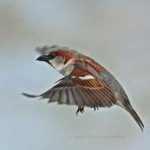 My father used to tell me that good leadership is not asking your soldiers (my dad was an Army lifer) to do things you know they won’t do. Or things that are stupid, w/ no point. It undermines both your credibility and your men’s trust in you. Live-trapping even three of the hundreds, possibly thousands, of sparrows in our neighbourhood, when you haven’t even done your homework on purple martins, is about as stupid as I can imagine. And cruel. It reminds me of the ways in which we place a hierarchy of worth on life, on lives: sparrows inferior to purple martins, which are inferior to, say, eagles. Which of course are superior to turkeys, despite what Ben Franklin said.

Because I have to admit ~ I would free the sparrows even if Mr. Neighbour had sited his purple martin house w/ exactitude and precision. I don’t believe that some birds deserve death, so others can live. I have a hard time w/ that ideology on any level. If you want purple martins, then do the necessary research. And figure out a non-lethal way to keep out sparrows. Or, if all you care about is mosquitos? Put up a bat house. Far easier to populate, and they’re endangered right now.

Still, I’ve learned something from the whole infuriating incident:  Stand up for what I think is right. But do my homework first. And don’t expect someone else to do the hard things for me.

It’s not enough to redeem the sparrows I now have to watch for, to free, but it beats just getting mad. And I’m thinking it’s a lot better beginner’s heart ~ 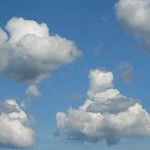