I’ve mentioned elsewhere in this blog — more than once — that I’m a lousy traditional meditator. I suspect a lot of working American Buddhists are. It’s hard to find time to sit on a zafu and meditate. Dinner, work, email and other stuff  take over my days like petty despots. They scream like the gulls in Finding Nemo: ME ME ME ME! And so I attend them, ever dutiful.

I’m better at what Thích Nhất Hạnh talks about ~ active meditation. Immersion in petting the cat, the rhythm and cadence of chopping peppers for goulash, carefully pasting a picture into my  journal. So my ongoing sitting practice is rarely on the zafu. It’s in the kitchen, at my desk, and often on the deck, watching the seasons change. I can sit for hours (I’m not kidding) in one of the deck rockers, barely moving, leaning into the sun as if it supports me.

Birds are like the hands of some great seasonal clock. The goldfinches that aren’t migratory, for instance, flock back to the sunflower feeder about now. They’ve exhausted the small supplies of natural food stuffs, and despite what the bird books tell you, ours will spurn the thistle feeder for the black sunflower seed. Their migratory cousins won’t be in for a couple of months, but already the flashy resident males are beginning to gild up, breasts ripening like wheat.

This has been the winter of robins, a new hour for us.

They’ve even visited the feeders and the birdbath, unusual for ground-lovers. I watched as one slurped long swigs from the birdbath, cocking his head as he drank. Every time I see one, I hear my father’s voice, singing little robin red breast, high up in a tree ~

And there are the woodpeckers, surely the most persistent of birds. Ours convinced us yesterday that we had to make time in the day not for meditation, but for an emergency trip to Wild Birds for suet. He just couldn’t reach the last bit of suet in the hanger, but was working at it diligently.

When I sit on the deck, wrapped in the thin yellow fabric of winter sunlight, the birds are what my meditative mind should be — thoughts that come & go, flying through the blue sky that’s always there. And then comes spring, when to get back outside is utter bliss. The soft green fragrance of new life is everywhere, and birdsong is a loud orchestra re-tuning. Then summer’s hummingbirds, fall’s bright flickers… 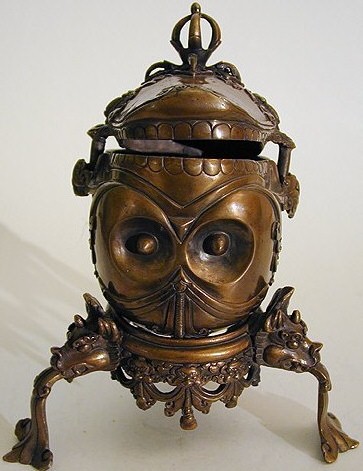 Each year these seasonal hands seem to move faster. The goldfinches come earlier. The hawk flies closer to the house as it grows colder, cruising for an easy lunch. So sitting on the deck birdwatching is a very Zen meditation on my mortality, the finite arcs of life & beauty. It’s the equivalent of Buddhist meditation in a graveyard, or the old Tibetan skull cups. Both were to remind us that death is all around us, so we would live more mindfully in the moment.

Sitting on the deck, watching the birds form a queue for the millet, and stand in another line for the saucer of water, I’m reminded that life is often about waiting. About being patient in the moment. About taking turns and believing things will turn out as they should. About changes that sometimes are new robins, sometimes the fragile corpse of a wren on the mat, the present of a predatory cat…

It’s not a bad lesson for a beginner’s heart, this reminder to be present while we can. And it’s far more pleasant than the graveyard I once lived next door to ~