This is an excerpt from my book The Complete Encyclopedia of Angels: 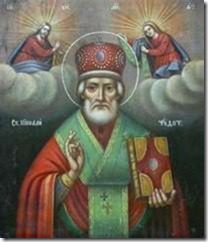 Nicholas was born in Lycia, a province of Asia Minor (Turkey). As a young boy, he made pilgrimages to Egypt and Palestine.. Eventually Nicholas became the Bishop of Myra. When the Roman Emperor Diocletian imprisoned all Christians, Nicholas was exiled and put in prison. He was released in 324 when Constantine the Great became Emperor.

Nicholas was known for his generous spirit, piety and miracles. The many stories and legends about St. Nicolas explain why he is so well loved and why he is seen as the protector and savior of all those in need. One story tells of a poor man with three daughters. Without a proper dowry these women would be unable to find a good husband and would surely have been sold into slavery. On three different occasions bags of gold were thrown into their house through an open window. In some versions of the tale, the gold fell into stockings left by the fire to dry. This led to the custom of children hanging stockings to be filled with gifts by St. Nicholas. Eventually he became associated with Father Christmas.

After his death, Nicholas was buried in Myra. His bones began to continuously ooze a sweet smelling oil. This oil has only stopped flowing four times: when his successor was expelled from office, when his relics were moved, during World War I and in the fifties when the basilica was being restored.

St. Nicholas is a generous, kind-hearted soul who will help anyone in need. He has long been associated with pine trees and the color green. When you would like his assistance light a green candle and perhaps sprinkle some pine oil. Ask for his help and then open your heart. Don’t be surprised if he suggests that you give in order to receive.

Brides
Bakers
Children
Travelers
Anyone who wants to open their heart