The Breath of Life

Excerpted from "The Book of Ch'i: Harnessing the Healing Force of Energy" with permission of Tuttle Publishing.

Ch'i is 'breath,' it is the air that we breathe and at the same moment the energy and vitality that sustain us. Everything we see, or touch, or experience is composed of ch'i and is merely an arrangement of this energy into recognizable form. It is a concept comparable to the explanation of quantum physics for the structure of atoms and molecules as accumulations of energy organized into distinct patterns. Our whole existence is determined by this energy. All facets of human life, our physical health, mental alertness, and emotional stability are conditioned by the levels and the relative flow of ch'i in and around our bodies. Summoning, conserving, and using ch'i therefore is vital to maintaining a happy and healthy life. This is the premise upon which the work of energy, the ch'i kung of inner alchemy, rests.

Ancient Chinese philosophers of all major traditions accepted the centrality of working with ch'i as an element of their practice and constructed an elaborate schema to explain how it actually functions within the body. Ch'i operates through the bipolar dynamic of yin and yang, in a constant process of transmutation. When we breathe in it is yin and when we breathe out it is yang. This bipolarity is the constant of the inner alchemy schema and is present in each aspect of the functions and movement of ch'i.

Central to all Oriental health practices is the theory of yin and yang, first set down in the Book of Changes, or I Ching, during the second millennium B.C.E. Yang, represented by a strong continuous line, is balanced by the yielding, broken line, yin. These forces, grouped in eight combinations of three, [form] the eight trigrams of the pa kua, [and] represent all the possible permutations of elements and natural forces at work in creation. Our health and vitality, our moods, needs, and desires, are all expressions of the exchange of these forces, one into the other.

Heaven, the strongest combination of three yang lines, is understood to be the active, creative male force and is associated with warmth, light, the sun, and the passage of time, while the most yin trigram, the three broken yin lines, symbolizes earth. This feminine force nurtures and provides food, shelter, and rest and is seen as still, dark, and cold. These forces are constantly in flux, for yin can only be yin relative to yang, and as one force expands the other will contract. Within each force is the character of the other. As yin contains an element of yang, so yang surrounds a complementary element of yin.

This interaction of yin and yang is the dynamic of the phenomenon of ch'i, the primary energetic force from which the basic substance of all life and matter is formed. Ch'i can be substance or it can exist without form, it can be thought or action, the spiritual or the material. The non-material states, which are closer to being pure energy, tend to the yang, while the coalescence of material form is more yin. Good health is founded on establishing a natural cyclic equilibrium of these two forces.

In Taoist cosmology it is the Three Powers of Heaven (yang), Earth (yin), and Man (yin and yang) that govern the flow of ch'i. Yang ch'i flows downward from Heaven. Yin chi flows upward from Earth and in the zone of [the human being] that lies between them, the flows meet and combine. Within the human body this trinity is mirrored in the Three Treasures of jing, or essence; ch'i, or vital energy; and shen, the spirit. In distinction of the laws of yin and yang, which affect all the processes at work within the universe, the Three Treasures relate directly to the phenomenon of life. They conceptualize three planes of existence for all living beings; the mental, physical, and energetic. Once again it is their relative strengths, and the balance that can be achieved between them, that will determine our health and longevity. In the culture of China, to be a "superior person" is to be strong in all Three Treasures; body, breath, and mind in natural harmony. The Three Treasures are the gift of the Tao bestowed on us at birth. 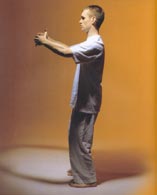 Within the body of the Three Treasures are located in the san tan t'ien, the three elixir fields. Jing, the primordial essence, is positioned in the lower elixir field below the navel and is associated with our sexual glands. Ch'i, is located in the middle elixir field around the solar plexus and is linked to the adrenal glands. Shen, or spirit, is centered in the head and is related to the pituitary and pineal glands. The internal alchemy of Taoism transforms essence into energy, energy into spirit, and spirit into the vital qualities of the universe, the mysterious resonance of power, compassion, and wisdom.