Beyond Belief at Burning Man

Where else can you phone God, swing on a slab, and burn emotional baggage?

Beliefnet
The Burning Man festival, which started small in 1986, has grown into an annual week-long event of experiential art and self-expression in the Nevada desert the week before Labor Day. This year more than 30,000 people joined to create a temporary community, for one week the fifth largest city in Nevada. The 2003 art theme was Beyond Belief. Corinne Schuman takes an inner and outer journey through this year's Burning Man.

In a place that begins as a blank canvas in the middle of the Black Rock desert of Nevada, on land that is now a dried-up lake bed, a city of 30,000 is born, built, and then erased without a trace. For a week at the end of August, the middle of Nowhere becomes the center of NowHere, as artists and revelers pilgrimage to what many feel is their true Home. This year the preordained theme, Beyond Belief

, added an extra element of the transcendental, the surreal, and the spiritual to an experience that is always beyond belief. 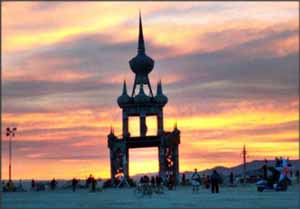 The Temple of Honor, c Copyright 2003 by Dan Moore

Many lessons at Burning Man pertain to life, so it seems appropriate that in an environment rich in creativity, revelry, humor and community, there is also the overarching desire to believe, to have faith. My previous year at Burning Man, I discovered that I had little faith, that I was always trying to be in the driver's seat. I spent the past year experimenting with faith, with my relationship to God, questioning and receiving answers. So returning to Burning Man seemed like a full-circle journey for me from the doubtful place I was at last year to a place of faith.

This year's theme inspired artists to inundate the playa with labyrinths, temples, and sacred spaces where release and purge, honor and prayer were encouraged and revered. As I journeyed through the larger-than-life art installations, I felt as if I were being led by an unseen hand.

My first encounter was with a giant chandelier that had seemingly fallen from somewhere else and crashed down in the middle of the desert floor-or playa. It had landed on a tilt, and as I explored the scene, I noticed a giant chunk of ceiling strewn a few feet away. Aha! Some ceiling in another dimension was now missing a chandelier! Beyond belief-or suspension of disbelief?

God's on the Phone

Going with the latter, I continued my stroll, which then led me to a lone phone booth-"Black Rock Bell," read the sign, "Telephone to God." There was a line of people waiting for the phone. As I approached, the person on the phone looked at me, asked my name, and said, "God wants to talk to you," as he handed me the handset. Wow, I had been chosen!

The voice on the other end of the line was male and British. "Do you have any questions for me?" he asked. Did I ever! But what came out was, "How do I fill my well?" "Which well?" God responded. Hmmm.great question, I had never thought of it that way before. Leave it to God..He then informed me that he could fill my well, and meanwhile encouraged me to go out, meet people, make friends, and have fun. Sounded like good advice. As I passed the phone on to the next eager recipient of a conversation with God, I grabbed it back at the last minute and told God I loved him. "I love you too," he said.

The Temple of Honor

As I continued walking, the Temple of Honor beckoned me. This temple was a structure second only in magnitude to the Man, an 80-foot effigy that watches over the city and its residents throughout the week and burns toward the end of the festival. Whereas the Man strikes me as cold and stiff and stoic, his "burn" enveloped in frenzy, chaos, aggression, rowdiness, and release, the Temple, which burns one night later, is solemn and beautiful, rich in emotion, grief, and surrender. This year's temple was dedicated to Honor, and many used the space to honor loved ones who had passed on.

Built out of paper and cardboard, with black and white designs, the Temple invited people to write notes, post pictures, meditate, weep, honoring lives from past and present. I knew why I was there, and it was to honor a spirit that had died, perhaps many times, but was still here to witness this life and experience-myself. I had yet to truly do this, and at that moment I felt ready to start. "Honor Thyself" I wrote in large letters on the back of the Temple, which faced away from the city toward the open playa where life and space seemed more ambiguous yet open to possibility.

I journeyed farther out toward the Temple of Gravity, a huge installation that looked like a child's mobile but dangled 8-½ ton slabs of granite rock 30 feet above the playa floor. People were swinging on them and dancing. I spied a slab that was rocking slower than the others and decided that that was the slab for me. With help from two people I had never met, I was lifted onto that rock. I looked into the eyes of the man who held my wrist and, it seemed, my life. " Am I OK?" I asked him. "Trust," he said, looking back into my eyes as I ascended to the slab. The others sitting on it greeted me with a "Welcome to Chill Slab." On Chill Slab, I soon learned, the occupants sat quietly, swinging gently, watching the astounding celebration throbbing around them.

Everywhere one looked there were glowlites, music, dancing, fire, shouting, the once-blank canvas alive and explosive. On Chill Slab we rocked, we witnessed, we sat, we chilled. Sometimes someone on the ground would come by and try to swing our slab back and forth, looking to keep our momentum going, perhaps. Then an occupant of our slab would shout out, "HEY! This is CHILL SLAB!!" until they let us be. Our momentum needed no help from below. The next day, at the Temple of Gravity once again, this time in daylight where the dance party from the previous evening had dissolved and the temple reclaimed its peaceful and awesome stationery power, I pointed out to a friend the rock I had chilled on, my Chill Slab. He inspected it a bit, and then smiled and said, "You better hope that was Chill Slab, one of the four bolts holding the slab in place is missing!" Hmmm.Beyond belief, was I glad that slab had been Chill Slab that night.

As I walked along toward my tent, I saw a piece of beach glass on the ground. To pick it up as trash in an effort to "leave no trace," one of the most important mantras of the festival, would be to be in the right place at the right time. To leave it behind as debris from an ancient period, when this desert was a lake; or to covet it and take it home with me, covered in playa dust-these are also being at the right place at the right time. You can't go wrong. The playa will provide. Our only responsibility is to listen and pay attention.

On the Burn Platform

With the burning of art, of waste, of emotional baggage so central to Burning Man, I made my way on the final morning to a Burn platform, intending to burn what I had come to release. I passed the phone booth to God once again, where a woman called out to the line of patrons, "You don't need a phone to talk to God!" Someone smiled and responded, "It's a clearer connection-no static!"

I carried with me a photograph, some words written down on paper, ready to burn, to release, to purge myself of an attachment I had that was very painful to me. As I tossed my mementos into the fire, I wept, I felt angry. I did not feel different. I had burned the physical, but the emotions had not changed form along with them. They were still present, I was still holding on. I noticed a praying mantis. They do not live in the part of the desert where Burning Man takes place, for without our temporary city, there is no shade for them. Yet this one was for me, I decided, reminding me to pray.

A friend had turned his car into an art car for Burning Man, wrapping it in burnt cloth with the intention of making it a vehicle that can transport its contents from one world to the next. After being questioned by numerous artists and curious onlookers as to what his "vision" was, he was able to define it for them. By the end of the week, however, it just looked like a mess, cloth coming unraveled, about to fall apart at any minute. To me it looked strikingly like the dusty, yellow-white playa surrounding it. "See that?" he asked me, pointing to his car, "I finally figured out what my art car actually represents. My week."

We arrive, we unravel, some of us fall apart, we get tossed and turned and blinded by spontaneous dust storms that interrupt any "plan" we may have been working towards, We get up, rinse off, and try again. Or we discard the "plan," and just sit with each moment, becoming a witness to it rather than a solution to it. We breathe, we burn, we revel, we weep, and-beyond belief-we keep returning.