In an excerpt from his new biography of the Republican vice presidential candidate, author Mark Joseph says Sarah Palin is a Christian who believes in signs and wonders. 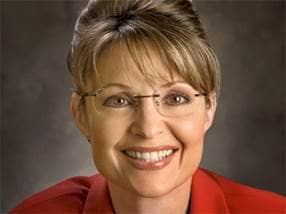 Sarah Palin was a part of a modern movement of Christians who were comfortable with rock music (especially if it reflected their Christian beliefs), long hair, tattoos and even involvement in politics, something that Christians of yesteryear often frowned upon. As she looked out across the audience that night, her charge to the graduating students reflected a new, hipper brand of Christianity that she saw unfold before her eyes. As she did so, one young man caught her attention:

"I just say, 'Bless You.' You guys are all a bunch of cool looking Christians also. Ben, I don't know you well yet, but looking at you I'm thinking, 'People are going to be interested in Jesus Christ through you because of the way you look' This red headed sasquatch for Jesus, you look good! Times are really changin', and with the times that change, looks even change, you know? And, and that's something I did notice about you guys. You know, just hip, and uh, unique, and creative. I see a lot of creativity in all of you. I, I just want to bless you….I didn't prepare anything thinking that our schedule wouldn't allow me to be here. But, I have a word, but really I'm cheating 'cause it was a word that was given to me today. I'm going to give it to the Master's Commission students because I think it's so applicable to where they're headed."

As she neared the end of her talk, Palin quoted from a Bible verse and wrapped up and gave a final charge to the students:

"Ephesians 1:17—and this is what I want to pray over you guys to," she said. "'That the God of our Lord Jesus Christ, the Father of Glory, may give to you a spirit of wisdom and of revelation in the knowledge of him.' And that spirit of revelation also, including a spirit of prophesy. That God's going to tell you what is going on, and what is going to go on and you guys are going to have that within you and it's just going to bubble up and bubble over and it's gonna pour out throughout the state of Alaska. Again, good, good things in store for the state of Alaska, let us pray for God's will to be done here, for all of your destiny's to be met in this state, there's been so many words and over the state of Alaska. We being, the head, not the tail, and I see things now in the works, it seems like things coming to fruition—things are percolating, things are coming along and I'm praying for an outpouring of God's spirit here--that revival to be here in Alaska. All you Master's Commission students and all of your supporters, all of your friends and family, your friends in this community, and throughout the state of Alaska, may you touch them all. And may Alaska be blessed through all of you guys. And, I love you guys and thank you so much for dedicating your lives to Jesus Christ. Thank you."

But the evening wasn't over yet. As the church's current pastor took the mic, Palin remembered something she had left unsaid and reached for the microphone. What would follow was an extraordinary exchange, even by contemporary Evangelical standards because it showed that Palin was not just an Evangelical, but one who believed firmly in signs and wonders and prophecies, that God didn't just speak to his children through the Bible, but also through special impartations that could be given to one Christian which were to be passed on to another for the purposes of encouragement. She also clearly believed in a type of prayer that was different from many Christians in America who would meekly pray for God's will to be done. Instead, she exhibited belief in a more confident style of prayer which expected answers. Palin described an encounter with a visiting pastor who had prayed explicitly that God would make a way for her to win the gubernatorial election, as an example of this kind of prayer:

"We forgot to talk about Pastor Muthee," Palin began. "As I was mayor and Pastor Muthee was here and he was praying over me, and you know how he speaks, and he's so bold. He's praying, 'Lord, make a way, Lord, make a way.' And I'm thinking this guy's really bold—he doesn't even know what I'm going to do, he doesn't know what my plans are. And he's praying not 'Oh Lord, if it be your will may she become Governor' or whatever. He just prayed for it, he said, 'Lord make a way and let her do this next step.' And that's exactly what happened. So again, very, very powerful coming from this church. So that was awesome about Pastor Muthee."

"This is awesome. Making a prophetic declaration and it unfolds the kingdom of God. You know, and so there is a prophetic call. But Paul Riley, and this is not in the program, but she said pray, pray, pray…"

Concluding his talk, he then asked that the founder of Wasilla Assembly of God, Pastor Paul Riley, who had led the church for 44 years before his retirement in 1999 and who had mentored Sarah Palin since she was a little girl, come onto the stage and prayed for the girl who had become Governor:

"Father we are so humbled and grateful to you for your mercy and love, for your kindness," Riley, an older man with a bald pate, began. "We have come to the kingdom for such a time as this. Lord, we thank you because you have blessed us with all spiritual blessing in heavenly places. And today we have experienced that as we have gathered together in your name."

Was Riley aware that Palin was being mentioned as a possible vice president for McCain? It's possible, but there was no explicit indication of this on this occasion, still knowing or unknowingly, signaled that he was aware of the possibility with a reference during his speech to Palin's being ready, "for such a time as this." The phrase was used when Esther, in the Old Testament book of the same name, was charged by her cousin Mordecai to use her position as Queen of Persia to protect the Jews from being slaughtered in an evil plot.

"The book of Esther tells another story of love, sacrifice, and God's timing," noted author Marvin Williams in the publication Our Daily Bread. "Mordecai, a Jew in exile, refused to bow to Haman, second in command to King Ahasuerus. Haman became furious and plotted to destroy Mordecai and all the Jews. So Haman deceived the king and persuaded him to issue an edict condemning the Jews to death. When Mordecai told Queen Esther about the edict, he urged her to intervene. 'Who knows whether you have come to the kingdom for such a time as this?' he said. Approaching the king uninvited was punishable by death. But Esther seized the moment to save her people!"

By this time, something extraordinary seemed to be happening in the room. As the elderly and slightly stooped pastor stood inches away from his protégé, his voice became choked and he continued the prayer with added emotion:

"…that we will be rooted and grounded in love, and that your love will abound to the multitudes that need your love. We thank you Lord for this occasion, we thank you for our Governor and we ask your blessing upon her family and her future. And Lord, we are just expecting great and mighty things through our Lord Jesus Christ. Amen."

If Palin was moved to tears she didn't appear to show it, for she took hold of the microphone once again and spoke one last time:

"Hey, thank you so much, I appreciate this," she concluded. "And one last thing…as I travel around the state, it's really cool to get to visit other communities and visit other churches. And, once in a while, a pastor will come up to me before the service starts and says, 'Now, I don't know about your background but we welcome you to our worship service. And, now, don't be surprised if maybe a parishioner or two may want to raise their hands or clap.' And I say, 'I grew up at Wasilla Assembly of God, nothing freaks me out about the worship service!'"

Palin may not have been "freaked out" about what went on at Wasilla Assembly of God, but for millions of other Americans, including members of the press corps, there was much about Palin and her church's views to "freaked out" about.