Fred Thompson: Questions On Faith Come Only From the Media

The former senator and his wife Jeri discuss Thompson's reticence about his faith and question Mike Huckabee's abortion record. 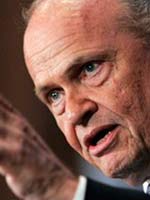 Billing himself as the Republican field's lone true conservative, Fred Thompson and his wife Jeri talked to Beliefnet politics editor Dan Gilgoff as they campaigned in rural South Carolina.
Is religion playing too big a role in the presidential race?
Fred Thompson: I don’t have any feelings along those lines. I think people have a right to express themselves, including people of faith, no question about it, and they’re participating and I’m glad to see it.
Last year, Focus on the Family’s James Dobson said it was his impression that you weren’t a Christian. Are the faith lives of the candidates playing too big a role in the race, as opposed to the faith of voters?
Fred Thompson: The only thing I hear about it are because of questions of people such as yourself [reporters] are asking, and otherwise it’s never an issue. People have a right to their opinions and a right to express their opinions, and it’s not for me to judge them on that basis and I don’t appreciate it when I’m judged. As far as I’m concerned, everything’s on track.
You said in the most recent debate that Huckabee was a “Christian leader” but also a “liberal leader.” Do you think he’s gotten too much Christian support on the basis that he’s a Christian leader?
Fred Thompson: That’s not for me to judge. I just related the facts. The facts are that he is a Christian leader and the facts are the he has more liberal economic and foreign policies than I think is good for our country and out of the mainstream of the Republican Party.
In an interview with Beliefnet, Mike Huckabee said that your approach to leaving the question of abortion to the states would be as immoral as leaving the issue of slavery to the states during the Civil War…
Fred Thompson: You have to go back and check—Governor Huckabee said that it ought to be left up to the states pretty consistently up until he started running for president. You ought to check on that. You ought to do a little research on that and when he says things like that ask him when he changed his mind.

You’ve staked a lot of your campaign on South Carolina? How well do you have to do here in order to stay in the race?
Fred Thompson: Pretty doggone well, pretty doggone well. Different [candidates] have won different important states and in every case they probably had to win those states and they did so… we’ll see on election night how well very well is, because rankings and percentage play into it as well, but there’s no question I have to do very well here.
Does that mean first or second place?
Fred Thompson: That’s all I’m saying about that.
Jeri, some conservative Christian leaders I've talked to say that they're more impressed with you than with your husband.
Jeri Thompson: We are really a team, from anything from national security and China and America’s role in the world to family values—using the bully pulpit to the extent that a president can. Fred often talks about the fact that he doesn’t really want to be president but to do those things that only a president can do.
One of those things is use that bully pulpit to talk about the value of being a father... Fred’s been blessed—I’m his second family, I’m his second wife. He was married at 17. This is not his first rodeo, so looking back and knowing what your values are become a little clearer when you get older. One thing he’s said often is that what goes through a man’s mind from the time our four-year-olds are at the top of the stairs to the bottom is what made him ultimately decide to run for president. If we don’t address these issues… in terms of what we leave our next generation and what we leave our children--that really motivated us. And our faith.
Conservative Christian leaders have criticized your husband for not talking enough about his faith.
Jeri Thompson: Since when is humility a bad thing? This is the first cycle when humility in a leader... how would Abe Lincoln have fared, how would Eisenhower have fared? But if we didn’t have faith, we wouldn’t be here. We have nothing to lose here but our integrity.