12 Things You Didn’t Know about Our Founding Fathers

While many of us know and appreciate the Founding Fathers of our country, you may be surprised to discover the interesting facts that helped cultivate and distinguish these men and their efforts. 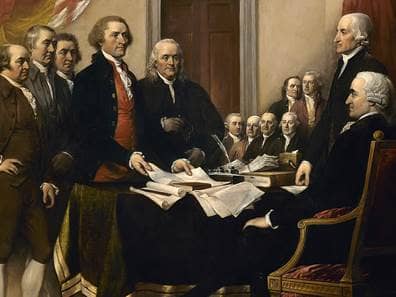 America’s Founding Fathers include George Washington, John Adams, Thomas Jefferson, James Madison, Alexander Hamilton, James Monroe and Benjamin Franklin. Together these men structured the American democracy and set the precedence for our government. While many of us know and appreciate the Founding Fathers of our country, you may be surprised to discover the interesting facts that helped cultivate and distinguish these men and their efforts.

1. Benjamin Franklin was not allowed to write the Declaration of Independence because everyone thought that he’d try to slip a joke into the document. After everyone signed the document it’s reported that he said, “Gentlemen, we must now all hang together, or we shall most assuredly all hang separately.”

2. Benjamin Franklin was an early supporter of abolishment. He tried to abolish slavery in 1790 with a petition to congress.

3. Alexander Hamilton was the only president from the first five to NOT hold any slaves.

5. On a trip in England, Thomas Jefferson and John Adams visited William Shakespeare’s house together. They vandalized a chair by chipping off chunks to keep as souvenirs

6. Thomas Jefferson could read and write in six languages – Greek, Latin, French, Italian, Spanish and English. It’s also rumored, throughout history, that he may have also known Arabic, Gaelic and Welsh too.

7. John Adams was the only president to be the father of a future president (John Quincy Adams) until George W. Bush became president in 2000, making George Bush Sr. the second president to have a son also be a president.

8. Alexander Hamilton was killed by Aaron Burr in a duel in Weehawken, New Jersey in July 1804. Hamilton’s son, Philip, had died in a duel three years earlier at the same location.

10. James Madison was the smallest president in history. He was 5’4” and only weight about 100 pounds.

12. Thomas Jefferson owned two grizzly bears that he kept in a cage outside of the White House. He later gave both bears to a friend named Charles Wilson Peale. After one bear broke free from its cage and caused uproar, the bear was shot dead and the other was put down shortly after.

For the generation of national leaders coming of age in the 1820s and 1830s, “the founders” represented a heroic but anonymous abstraction whose long shadow fell across all followers and whose legendary accomplished would never be compared.