The Hidden Hand of Bureaucracy

The Constitution was formed to protect our freedoms by instituting checks and balances within three branches of government--the executive, legislative and judicial. There is a way around this system, a fourth unconstitutional branch, the bureaucracy. 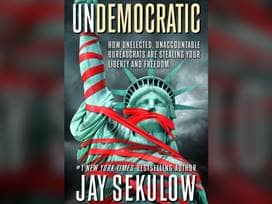 The Constitution was formed to protect our freedoms by instituting checks and balances within three branches of government--the executive, legislative and judicial. There is a way around this system, a fourth unconstitutional branch, the bureaucracy. This branch influences and writes more laws than Congress with a hidden hand without a single vote from Congress.

Constitutional attorney Jay Sekulow is the Chief Council of the American Center for Law and Justice. He’s argued 12 times before the US Supreme Court on First Amendment cases, and in his book, Undemocratic, Sekulow explains how unelected officials and bureaucrats are stealing our freedoms.

One of the agencies is the Internal Revenue Service, which has been criticized not only by Sekulow, but the Oversight and Government Reform Committee. Like the IRS, the Department of Justice, or Veteran Affairs--they govern themselves without accountability from an outside entity. The committee and leaders like Sekulow hold the government accountable, and shine a light on where your tax dollars are going. In 2014, the committee discovered that the IRS targeted conservative groups. The report found that democratic members of Congress “and liberal advocacy organizations urged the IRS to investigate conservative nonprofits engaged in political speech.” Tea Party members, volunteers, and family are not exempt from the IRS. The IRS asked their non-exempt tax applicants the following questions as written in Undemocratic. Do you directly or indirectly communicate with member of the legislative body? How does you organization solicit members? Sekulow said these questions are illegal and violate the First Amendment. What was startling is the IRS shared confidential tax information about conservative groups. The IRS mistakenly sent confidential information on Republican candidate, Mitt Romney, to the liberal group, the Human Right Campaign during the 2012 election season,” writes Sekulow.

The government is a formidable opponent, which can overwhelm anyone who demands change.

“One of the things, I think you have in this situation when you look at these giant bureaucracies, whether it’s the IRS or EPA, or the National Labor Relations Board, or the Department of Justice, is the reaction ‘How can I, this individual citizen, resist this?’ But you can by taking a stand. The fact is if you look at every major case that goes to the Supreme Court in the US it was an individual who resisted the overreach of the US government.

“Individuals can resist where the government is overreaching, and learn about their rights.” Sekulow lists practical ways you can do this. He urges that you have the right to challenge the government’s actions, and make them accountable. Get involved. Attend town halls, write letters to officials, use social media to get the word out, and make leaders accountable. They are no different, than those leading in the private sector.

It’s time to restore what the Founding Fathers envisioned, and that’s the reason Sekulow’s ancestors fled from the czars of Russia. The reason many fled from Benito Mussolini’s Italy, and other communist regimes. They wanted freedom of speech, religion, and live in a land “that all men are created equal.” Let’s not lose this freedom. America has issues, yes, but we still have the best democratic system in the world. “We have the best judicial system in the world,” he said when asked about the lessons he learned as a litigator, especially in international courts. “When you look at the international criminal courts, you understand more significantly why that’s true.”Read more in Undemocratic.