The Dalai Lama Refuses to Judge

In past interviews and conversations, he has condemned bullying of gay, lesbian, bi-sexual or transgendered individuals – noting that it was a violation of human rights. 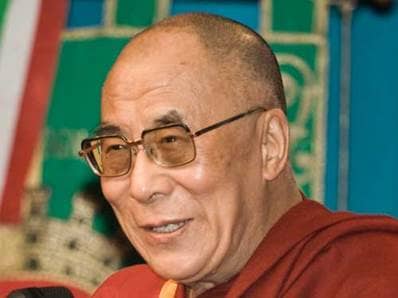 After offering the customary prayer, that opened the Senate session in Washington D.C., the Dalai Lama was interviewed by Larry King about his thoughts on gay marriage.

“If two people…really feel that way…and both sides fully agree, then okay,” said the Dalai Lama. “People who have belief or who have special traditions, then you should follow according to your own tradition. Like Buddhism, there are different kinds of sexual misconduct, so you should follow properly.”

In past interviews and conversations, he has condemned bullying of gay, lesbian, bi-sexual or transgendered individuals – noting that it was a violation of human rights.

Pope Francis is another prominent religious figure who is not shunning those who support gay and lesbian marriage. As the Pope, the Dalai Lama believes that everyone should be able to express themselves as an individual no matter how they identify themselves sexually.

The controversy behind gay and lesbian rights and marriage is surrounding most political conversations as several states have voted to pass or ban same sex marriage. The stand points of key religious figures are continually questioned because of the controversial beliefs that are triggered. As time progresses many religions are becoming more open to the idea of same-sex marriage and rights.