Studies reveal that gay and lesbian rights play a significant role within their religious beliefs of millennials. Based on the statistics, millennials believe that gays and lesbians should have the same rights as others. 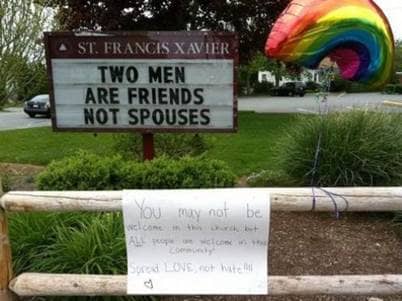 The Public Religion Research Institute recently researched the decline in millennial affiliation with church. Results report that one in three millennials (under 34) claim no religious affiliation and nearly one-third of millennials, who left the faith they grew up with, claim it is because of the “negative teachings” and/or “negative statements” related to gays and lesbians.

For millennials, studies reveal that gay and lesbian rights play a significant role within their religious beliefs. Based on the statistics, millennials believe that gays and lesbians should have the same right as others.

58 percent of Americans said religious groups are alienating young people by being too judgmental on gay and lesbian issues - while 70 percent of young people said the same thing. Pope Francis made headlines when he famously said, “Who am I to judge?” when the topic of gay priests came up in discussion. His remarks signaled a more tolerant and aware tone of the Catholic Church. The Pope has also become the first pope to referred to as "The People's Pope" because of his grounded and relatable undertones.

70 percent of millennials blame the churches for the majority of discrimination against the gay community. Robert P. Jones, CEO of PPRI said that, “While many churches and people in the pews have been moving away from their opposition to LGBT rights over the last decade, this new research provides further evidence that negative teachings on this issue have hurt churches’ ability to attract and retain young people.” Many millennials are choosing to question traditions and the overall acceptance of what the church says is right or wrong.

According to various research, 20 percent of Americans claim that they have no religious affiliation. However, millenials have a figure of 33 percent claiming the same which reveals that the younger generation is growing further away from the church.