Heather McGill Fights For Her Marriage 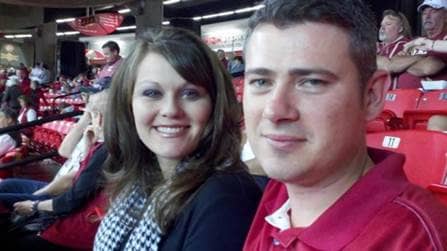 Heather McGill is married to an Alabama senator and reached her "last straw moment" the other day.  Her husband has a Facebook page and has been receiving pictures, suggestive messages and even had strippers show up on their front lawn.  So Heather sent them a message on morality and marriage and it has gone viral.

Jim and I celebrated our 33rd anniversary recently.  When we married we stood before God at the altar of our church because we didn't just promise each other "I do" - we promised God.  So did Heather and her husband, Shadrack.  They are strong, faithful Christians who are raising three girls.  The Facebook attacks and harassment are a direct result of the fact that they are very open about their faith and their values.   So Heather is fighting for her man, her marriage and her family.  And I want to say, "YOU GO GIRL!!!"

Heather and I value our marriages because we value what God has created.  And when we fight for what God has said and done, we serve God's purpose.  I just finished writing a Bible study from Matthew, Chapter 19.  The Pharisees were trying to entrap Jesus so they asked him what he thought about divorce.  John the Baptist had been beheaded because he spoke up about Herod Antipas divorcing his wife so he could move in a newer model.  (That sin has been around a LONG time!)

Moses wrote laws for divorce in Deuteronomy 24:1-4.  Moses didn't write those laws to endorse divorce, he wrote them because he knew it was going to happen.  Moses was trying to limit divorce and the sins that would accumulate after.

The Pharisees thought they had Jesus in a corner because if he answered pro-divorce he would make John's disciples mad and if he answered anti-divorce he would be saying that Moses was wrong.  But Jesus was the Son of God, so his answer was perfect.  He said: "Haven't you read, that at the beginning the Creator made them male and female, and said, 'For this reason a man will leave his father and mother and be united to his wife, and the two will become one flesh?'  So they are no longer two, but one.  Therefore what God has joined together, let man not separate" (Matthew 19:4-6).

When asked about divorce, Jesus answered by giving us God's definition of marriage.  Jesus starts his argument by saying to the Pharisees, "Haven't you read."  You have to love that.  Jesus looks at the teachers of Scripture and holds them accountable to it.  Lesson 1:  When you are in a spiritual debate, don't make it between you and the person, make it between God's word and the person.  That is what Jesus did.

Next, Jesus tells the Pharisees that God made people male and female.  Marriage is between a man and a woman.  How do we know that?  Bluntly, the two become one.  The sexual relationship is God's created blessing for the marriage relationship.  The only relationship for which God created the sexual relationship to belong.  If you want a strong marriage, keep that part of your life completely pure.  That is hard to do these days.  In fact, as Heather McGill would say, it is a fight.

When is a marriage worth fighting for?  When it is a marriage that God has joined together.  No one should ever try to undo something that God has done.  I know without a doubt that God brought Jim and I together, and called us to be married.  It is a good story...full of God ordained "moments."  Every marriage hits the occasional wall and needs to be worked on.  But I agree with Heather, when a marriage gets attacked, you come out fighting.  Satan is a roaring lion and one of his favorite meals to "devour" is a good marriage.

Is your marriage being attacked today?  If so, look past your spouse and find the real problem - then paint it RED.  In other words, find where Satan is attacking your marriage and disable him.  If you are involved with someone on the internet, understand that each time you turn your computer on for that purpose, you are inviting Satan into your home - to sit with your family and weaken it.  If you are a "harmless flirt" understand that there is no such thing.  Satan tells those kind of lies.  If you are single and attracted to someone who is married, you don't have to wonder what to do.  Run.  Resist the devil and he will flee from you. (James 4:7)

Look at the person you are married to.  Did God join you together?  If so, don't ever undo something God has done.  If you aren't sure if God joined you together - stand with each other at an altar, and ask him to.  Every marriage needs God's blessing and power.  Later Jesus told his disciples that not everyone could accept his word about marriage, but "The one who can accept this should accept it." (Matthew 19:12)  Don't marry someone who God has not chosen for you - no matter how much you might love them.  When you accept a marriage, you should accept God's definition for marriage.

I am blessed to have been married to Jim for 33 years.  My marriage is an important part of my relationship with God - not separate from it.  I'm glad God joined us together and I hope we have another 33 years ahead of us - or more!  And if you want to tell Heather you are proud of her, you can comment on the Facebook page.  A great marriage is worth fighting for!

And one last word:  Happy Anniversary Jim...you are my greatest blessing!

Janet Denison is the Director of Spiritual Formation for the Denison Forum on Truth and Culture, and the author of Content to be Good, Called to by Godly. She is a popular speaker for church and community events, and a respected Bible teacher. Janet blogs regularly at www.janetdenison.com. To connect with Janet in social media, visit www.twitter.com/janet_denison or www.facebook.com/janetldenison.