Cartoon fetus is 'a prenatal Bob Hope, entertaining the front-line troops of the pro-life cause,' says creator.

Beliefnet
Reprinted with permission of the National Catholic Register.

SCRANTON, Pa. - Illustrator Gary Cangemi is not a cartoon, but he felt like one when he conceived his pro-life comic character Umbert the Unborn.

"The proverbial cartoon light bulb went off above my head," Cangemi said.

Little did he expect the cartoon would draw the nationwide attention it has. Cangemi hopes the comic strip's success will translate into success for the pro-life movement. 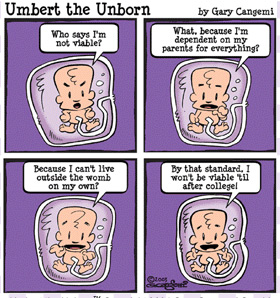 Cangemi created the comic strip in spring 2001. He had been working as a freelance graphic artist for 20 years, but he was dissatisfied with his work.

"I hadn't really produced anything that I could look back and be proud of," he said.

Cangemi's mother had recently died from cancer, and he was seeking a new direction for his career.

"I felt my mother urging me to pray for God's guidance," he recalled. "So I prayed, 'God, please give me a direction to go with my career.'"

While thumbing through an old scrapbook, Cangemi stumbled across a four-panel political editorial cartoon he had created 10 years earlier for his "Off the Board" feature in Scranton's newspaper, The Metro. In the cartoon, the baby overhears the voice of an abortionist describing the child as an "unviable, unwanted piece of protoplasm." At the end of the cartoon the baby cries out, "Speak for yourself!" "As soon as I saw the baby's face, the light bulb went off," Cangemi said. Cangemi proceeded to draw a dozen sample comic strips and soon realized his character needed a name. "I wanted a name that sounded heroic," he explained, "like Richard the Lionhearted, but I wanted it to be alliterative so I came up with ' _____ the Unborn.'" At first, he was unable to come up with a "U" name until he remembered the name of an author he had recently read - Umberto Eco. "Umberto sounded too ethnic," Cangemi said. "So I knocked off the 'o,' and Umbert was conceived." Before sending the cartoon off to newspapers, Cangemi wanted the input of a colleague. He approached Father James Paisley, pastor of St. Maria Goretti Catholic Parish in Laflin, Pa. "Gary expected that I would think it was a cute idea and move on from there," Father Paisley said, "but I was overwhelmed with the potential the project had. The cartoon gives a name, face and personality to the unborn baby within. I started laughing because I was thrilled by it." Within a week, with Father Paisley's assistance, Cangemi obtained then Scranton Bishop James Timlin's blessing. With that, Cangemi sent the cartoon off to about 150 Catholic newspapers. "The very first telephone call I received was from executive editor Tom Hoopes at the National Catholic Register," Cangemi said. "He told me he loved it and he wanted to use it on [the paper's] Culture of Life page." The cartoon made its debut in the Register in June 2001 and has been gaining exposure ever since. Breathing Life Cangemi possesses a vivid imagination. He has illustrated Umbert as an astronaut and a deep-sea diver. He's got him using a computer connected to the "Interwomb" to send "pre-mail," playing sports and even hosting his own game show - "Unborn Babies in Jeopardy." He's also drawn an embryonic version of Umbert. "I want to show that Umbert is a person at all phases," Cangemi said. "There is no trimester in which Umbert becomes a person. He's a person from the moment of conception." The cartoon has resonated well with a variety of audiences - pro-life advocates, expectant mothers and fathers, and children. One 7-year-old boy from Kentucky wrote to ask when Umbert was going to be born. "He's been in there long enough," Kevin wrote. "Don't you think it's time for him to be born?" Cangemi wrote back saying that, like Charlie Brown, Umbert is a cartoon character who is frozen in time. He told him that if Umbert is born, the cartoon will end, and he made Kevin a promise. "I promised him that the day all unborn children have the legal right to be born, that will be Umbert's birthday," Cangemi said. "It's a promise that I hope I will live long enough to keep." The cartoon is currently read by more than 400,000 readers nationwide. It has been picked up by approximately 20 publications as well as many parish bulletins. In December, Circle Media (the Register's parent company) will publish Umbert the Unborn: A Womb with a View. The book features a collection of 120 full-color cartoons as well as a series of page-by-page illustrations of Umbert developing from a single cell to a full-term baby and an array of Umbert's educational facts of life. Cangemi, who has three children of his own, hopes the book can help educate children and change hearts and minds on the issue of abortion in a non-threatening way. "If we can raise a whole generation of children respecting life - for whom it would be inconceivable to want to kill Umbert, the tide will turn," he said. Cangemi has other plans for spreading Umbert's message. He is unveiling an Umbert Web site, complete with an animated version of Umbert. In addition, he is launching a daily version of the cartoon for Catholic.net, and he also plans to offer the comic strip for syndication in the mainstream press. He stresses the importance of using humor.

"Charles Schulz was the first cartoonist to introduce Christian themes into a mainstream art form," Cangemi said. "I see Umbert as a kind of prenatal Bob Hope, entertaining the front-line troops of the pro-life cause and giving them a much-needed morale boost."