Josh Turner Let's the World In

Instead of reaching out to the world through song, in Man Stuff, Turner is able to tell his story without limitations. 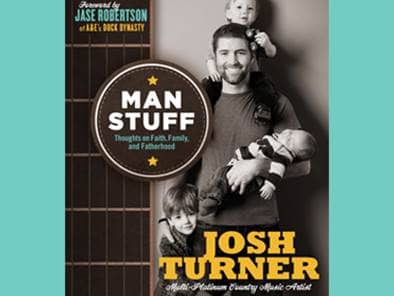 “There are 90 stories in the book. You can learn a lot about me and a lot about life. These stories chronicle all of the lessons that I’ve learned. It talks about marriage, raising children, music, being a steward of the land, being a man of integrity and character and facing fears. A lot of facets in life,” said Turner. “I feel like I’m a place in my career where I think people will be interested in what I have to say. I feel like I have lived enough to put a collection together of life stories that are meaningful.”

Turner lets his walls down and allows his fans to see the trials and tribulations that he has walked. Ultimately, Turner wants readers to learn from the life lessons he has went through and use that wisdom in their own lives.

“I grew up in a Christian household and I am very thankful for that. I had a lot of people in my life that didn’t have that luxury. They’ve had a lot of things that they’ve struggled and wrestled with. I know that my upbringing is very blessed. I wish everyone could have experienced an upbringing like I did.”

Instead of reaching out to the world through song, in Man Stuff, Turner is able to tell his story without limitations. “It’s always been hard to write songs. There’s been a handful throughout my life that came out easily. With a song it requires more of you – physically, mentally and emotionally. When you write a book you break down those walls and perimeters that may hold you back when you’re writing a song,” said Turner.

In his book Turner talks heavily about his obligation as a father. Turner wants to make sure that his children have the same solid upbringing that he had. “When I started having children I realized it’s not about just me and that I am providing for somebody. I realized I’m responsible for how I raise them. If they end up doing something wrong, the first person they look at is the parent. I either take the credit or the blame,” said Turner.