Little-known facts about one of the world’s most popular saints. 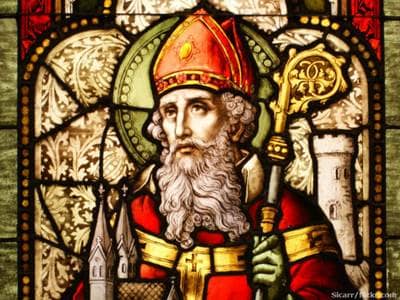 Each year millions of people observe St. Patrick’s Day around the world in honor of Saint Patrick of Ireland. Many will celebrate the heritage and the culture of the Irish by participating in Irish pride parades, wearing all green, eating Shamrock cookies, drinking with friends at their favorite pub, and sharing their favorite Irish quotes and blessings across social media among other things. How much do you know about the life of the patron saint celebrated each year in so many parts of the world and the legend behind the holiday? While the dates of St. Patrick’s life aren’t completely certain, we know that as an active missionary in Ireland, he lived a life worth noting. Here are seven things you probably didn’t know about the popular patron saint of Ireland.

His Real Name Was Not Patrick

According to Irish legend, his birth name was Maewyn Succat, or Magonus Succetus in Latin. He only began going by Patrick when he became a priest.

He Was Not Actually Irish

He Was Sold Into Slavery

When St. Patrick was captured by Irish raiders; he was forced as a slave to work as a shepherd, herding and tending sheep. Ireland at the time was a land of Druids and pagans. He reflected on this period in his memoir, The Confession, sharing how he was able to turn to God in the darkness. St. Patrick wrote: “The love of God and his fear grew in me more and more, as did the faith, and my soul was rosed, so that, in a single day, I have said as many as a hundred prayers and in the night, nearly the dame. I prayed in the woods and on the mountain, even before dawn. I felt no hurt from the snow or ice or rain.” After six years of being in captivity, he managed to escape after having a dream from God where he was told to leave Ireland going to the coast. Following God’s voice he found sailors there who took him back to Britain where he was able to be with his family again. During this period, he experienced a spiritual conversion. After leaving Ireland, he returned. He developed a strong desire to proclaim the Good News to the Irish.

St. Patrick was led by visions. These visions, or dreams guided many of the decisions he made in life. When he returned home, he had a vision that he talks about in detail in his memoir. “I saw a man coming, as it were from Ireland. His name was Victoricus, and he carried many letters and he gave me one of them. I read the heading: ‘The Voice of the Irish.’ As I began the letter, I imagined in that moment that I heard the voice of those very people who were near the wood of Focult, which is beside the western sea and they cried out, as with one voice: ‘We appeal to you, holy servant boy, to come and walk among us.” In this vision, he heard the people of Ireland who were practicing paganism telling him to walk among them. This vision prompted his studies and journey towards priesthood.

He Converted Thousands to Christianity

After following his calling to the priesthood, he was ordained by St. Germanus, the Bishop of Auxerre who he studied under. He was later ordained a bishop and sent to take the Gospel to Ireland. As previously mentioned, when St. Patrick first came to the country, Ireland was made up of mostly Druids and pagans. He often used shamrocks to explain the Holy Trinity to non-believers. Entire kingdoms were converted to Christianity because of his message. Over a span of four decades, he was able to convert Ireland to Christianity. He ordained many, held church councils and urged the people of Ireland to seek holiness in Christ. St. Patrick’s poem ‘The Breastplate’ acknowledges his complete faith, how important spreading the Good News was to him, and his total trust in God, no matter the opposition. “Christ be within me, Christ behind me, Christ before me, Christ beside me, Christ to win me, Christ to comfort and restore me, Christ beneath me, Christ above me, Christ inquired, Christ in danger, Christ in hearts of all that love me, Christ in mouth of friend and stranger.” Though he faced much opposition from pagan Druids, he was still able to live out his mission.

There are many legends about St. Patrick. One of the popular legends concerns what happened when St. Patrick arrived in Ireland. One claimed that he met the chieftain of one of the druid tribes who tried to kill him. Because of an intervention from God, St. Patrick was not only able to escape death, but also able to convert the chieftain and preach the Gospel throughout Ireland. Another legend claimed that St. Patrick was able to drive all the snakes out of Ireland. Scholars believe that “snakes” in ancient texts refer to pagan rituals beliefs and practices, not necessarily the animals themselves so these legends may have referred to St. Patrick’s ability to drive paganism out of Ireland.

A Life of Example

St. Patrick is recognized today by many for spreading Christianity throughout Ireland as a missionary and the example he set during his ministry. He is admired for his humbleness, his complete trust in God in all circumstances manifested in his unwavering faith. His mission was his life and this is one of the many reasons he is still celebrated today.