Sir Richard Branson, the creator of the Virgin brand - Virgin Records, Virgin Galactic, and Virgin Mobile are just a few of the enterprises - is a wildly successful entreprenuer. But many do not know that he started his first business from a church. 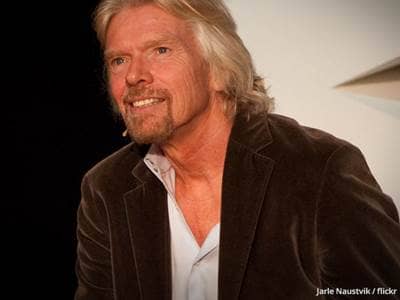 Sir Richard Branson was once told by his school headmaster that he would either end up in prison or become a millionaire. In hindsight, perhaps the headmaster didn't adjust for inflation.

Branson was the oldest of 3 children raised in an upper-middle class and well-respected family. His parents were very supportive of his ideas and initiatives, including a magazine he began at age 16, run from a church, which featured his interviews with many high-profile personalities. Advertising popular music within the magazine led to music sales, thus the birth of Virgin Records.

In 2007, Branson announced The Virgin Earth Challenge, a global science and technology prize of $25 million awarded to the individual or group able to demonstrate a commercially-viable design resulting in the sustainable removal of greenhouse gases without counterproductive effects.

It is this same innovative drive also behind Virgin Galactic, a commercial space tourism enterprise with the goal of space tourism becoming a reality this decade.

For more information on Sir Richard Branson or his companies, visit the Virgin website.