Women are Making Inroads in the Government

Women are not only making end roads in sports, as we learned the NFL is opening more executive positions for women. But they are also making gains in the male-dominated government. 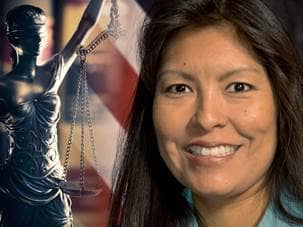 Women are not only making inroads in sports, as we have learned when the NFL is opening more executive positions for women, and  has hired female coaches. But they are also making gains in the male-dominated government. Diane Humetewa, 51, became the first Native American confirmed to the federal court bench in her state of Arizona in 2014.

The U.S. Senate made the decision to appoint six judges to the court, and the decision is most welcomed for not only for Humetewa, who was a court judge of the Hopi Tribe, but for many women looking to advance in law. She is the first female and first Native American to the Arizona court. Additionally, it was rumored that President Barack Obama was interested as a consensus nominee after Justice Antonin Scalia died in February.

Humetewa worked as the United States Attorney for the District of Arizona for two years, and served as professor at Arizona State University. A member of the Hopi Nation, the state has the most reservations in with country 21. The National Congress of American Indians applauded the efforts of the Senate and the president. Now, the Native Americans will have a representative on the bench.

“NCAI greatly appreciates the efforts of the president and Senate in achieving this historic confirmation. There are many qualified, talented people like Diane Humetewa in Indian country who are able and willing to serve. We eagerly anticipate many more nominations of Native people to the federal bench and other offices.”

In another historical move, Carla D. Hayden was nominated by President Barack Obama become the first female and African American to head up the Library of Congress. This will be the first time in its 216-year history that the institution had a woman take the reins. She could replace James H. Billington, who will retire after 28 years of service.

“This is truly a great honor to be nominated by President Obama to lead the nation’s library, the Library of Congress. It is my privilege to serve the Enoch Pratt Free Library and the citizens of Baltimore for more than 20 years, during which time we restored its world-renowned reputation.”

“The number of women serving in Congress has increased significantly since the early 1990s, when there were two female senators and 25 female representatives in the 101stCongress (1989-1991). As of 2015, a total of 36 women (21 Democrats and 15 Republicans) have served as governors in 27 states. In addition, one woman has served as governor in Puerto Rico. ”