Make Everything in Life Easier

By learning to be more efficient in your day-to-day work, monitoring how you're actually spending your time, and automating as much as possible with the "Less Doing" philosophy, you can use the time you save for what you care about and the people you love. 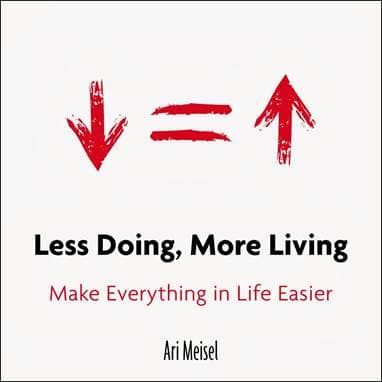 Excerpted from LESS DOING, MORE LIVING: Make Everything in Life Easier by Ari Meisel with the permission of Tarcher/Penguin. Copyright Ari Meisel 2014.

I don't want you to run errands, ever ever ever again. They're not efficient, and there's no way to make them efficient. They're a waste of your time. The number-one service I recommend to eliminate errands is Amazon Subscribe and Save. It allows you to subscribe to nonperishable items that Amazon sells: dog food, toilet paper, toothpaste, and other things like that. You can set what you want and how much - for example, three tubes of toothpaste every two months. You can cancel any delivery at any time, and you can get an extra delivery at any time, so it’s hardly even a subscription, and you immediately get a 5 to 15 percent discount for buying this way. Most important, once you set it up, you don’t have to think about it anymore.

Using Subscribe and Save is definitely cheaper, and it’s simpler than buying stuff in person. Even if you go to Costco, it’s a lot of stuff to carry, and there’s a good chance you’ll forget something or buy something you don’t need. With Subscribe and Save, Amazon basically becomes your digital pantry. I’ve already saved thousands of hours using this service. Over the last three years, my wife and I have not had to shop for things like toilet paper, dish detergent, paper towels, soap, razors, deodorant, baby food, diapers, dog food—the list goes on. It’s set it and forget it: I set it up, and now I don’t have to worry about it anymore.

If you don’t live in a building with a doorman or you have a hard time receiving packages, they’ve figured this out, too. They have a service called Amazon Lockers. There are about fifty locations throughout New York City that are set up like bus station lockers, where you can have your package delivered and you get a message telling you it’s there and ready for you.

Subscribe and Save is great for products with timing issues associated with them. For example, my wife and I use Brita filters. Every two months, we get a shipment of Brita filters. Now, instead of running out of filters, ordering more, waiting for them to come, and installing the new ones, I just get the shipment, know it’s time to change the filters, and put the new ones in. It’s out of my head. Similarly, every six months, we need to change the batteries in the smoke detectors, so every six months, we get a shipment of 9-volt batteries. When the batteries come, I change them. I never have to think about it or remember, and I never have a smoke detector beeping in the middle of the night. Peace of mind, time saved, money saved - works for me!

For errands that you can’t eliminate or automate, it’s time to outsource. You can get someone to do these real-world, in-person tasks for you. One such service is called TaskRabbit. It’s a lot like Elance but for real-world tasks. You can use the TaskRabbit iPhone app to enter a request by voice or text. You tell them what you need and when you need it, and a TaskRabbit provider will complete the task for you. It’s a competitive market among the helpers, so you’ll get fast responses and competitive rates. TaskRabbit can handle tasks like dropping off donations for charity, buying groceries, taking your car to the shop, hanging a shelf in your apartment, fixing your computer, and doing your holiday shopping. The site will also offer suggestions, free of charge. All TaskRabbit service providers go through a background check, and it’s not just for basic errands. They also have specialists, such as personal chefs and masseuses.

Here’s an example to give you a better idea of what this type of service can do for you. I have a nephew in Los Angeles, and three months ago, it was his second birthday. His mom told us he wanted a particular slide from IKEA. From New York City, I contracted someone through TaskRabbit. I had this person go to IKEA in Long Beach, get the slide, take it to my nephew’s house, and put it together. He even sang happy birthday to my nephew - and all for forty-seven dollars!

It’s not that my time is better than their time. It’s about batching. The people who do this stuff do it all the time. It’s a really incredible thing, and it’s time better spent. The idea is to get down to the 5 percent of tasks that only you can do, and only do those things. Then you can work on those things and maximize your efficiency and your skillset.

Ari Meisel has spoken at seminars and at a regional TED Talk about his struggle against a seemingly insurmountable opponent—Crohn’s disease, a condition exacerbated by stress. Through the process of data collection, self tracking, and analysis, Ari developed his Less Doing philosophy as a way of dealing with the daily stresses of life. Ari shares his essential “life hacks” daily on LessDoing.com and his full Less Doing program in his new book, Less Doing, More Living (on-sale from Tarcher/Penguin on April 3).