Faith has also been the center in Briles life. “It’s pretty simple. I don’t think anything happens just by chance. God is the reason. You structure your life to the principles in the Bible and you’re rewarded in the end,” said Briles. 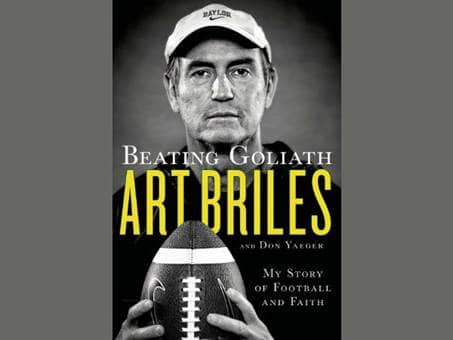 He’s known as the coach that can make miracles happen. He’ll turn a losing team into winners. Many have also called him the best coach in college history. Those remarkable words could only describe the one and only Baylor Coach Art Briles.

In his book Beating Goliath: My Story of Football and Faith, Briles talks about his coaching career from the very beginning. He discusses the nature of his coaching and the drive that sets his team apart from others. “I think a lot of things set people apart. But I believe that it comes down to beliefs, attitude and the environment. I’ve learned to always put the person first. We start everything with a relationship,” said Briles. “It’s hard to believe someone, unless you trust them. We build trust and that’s how you win.”

With decades of coaching under his belt, Coach Briles has learned how to deal with situations. “There are always struggles to win. Various degrees of success are determined by the current success,” said Briles. He says that winning six games sometimes is a great season, whereas in a different environment winning twelve games is a great season. He believes that it’s important to monitor the situation that you’re in and then go from there. These theories and strategies are simple and can be used as inspiration in real life situations that we face on a day-to-day basis.

Briles has coached greats like Wes Welker and the highly criticized Robert Griffin III. However, he believes that everyone is different and everyone is a challenge. “We try not to be too rigid and treat people as individuals. When you’re around youth that has vision and hope – it kind of rubs off on you,” said Briles.

Faith has also been the center in Briles' life. “It’s pretty simple. I don’t think anything happens just by chance. God is the reason. You structure your life to the principles in the Bible and you’re rewarded in the end,” said Briles.

“We started the book a few years ago but the timing wasn’t right. Everyone has a story and I just didn’t have a venue to tell my story until now. The purpose of a book is to let someone believe what they wouldn’t normally believe in. That’s where we took the book,” said Briles.