In Be Real: Because Fake is Exhasting, Pastor Rick Bezet calls readers to build their lives on authenticity, motivating them to drop their defenses, get connected to a community and become fearless and passionate followers of Jesus. 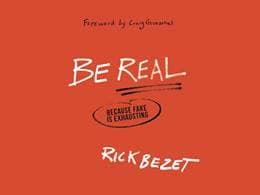 Baker Books, a division of Baker Publishing Group,” 2014, and Used by permission.God is not going to reveal everything about his plans to you immediately. In my experience, all you can do is say, “Okay, that looks really cool,” and then go for it. When we take that ﬁrst step, God takes the next.

Sometimes—maybe even most of the time—the ﬁrst step feels like a really big step. Sometimes it has signiﬁcant risk attached to it. Take the story of Esther, for instance. In Esther 1:13, King Xerxes, who was furious with his ﬁrst wife for publicly disrespecting him, chose to “consult experts in matter of law and justice,” and spoke with “the wise men who understood the times,” before deciding how to respond to his wife, Queen Vashti. When he had received their advice, which was consistent with the laws and culture of that time, he wrote an irrevocable edict that she would be forever banished from his court and her position as queen would be given to somebody else.

Then we read about Esther, a beautiful young woman raised by her uncle Mordecai because her parents had died when she was young. She was entered in the ﬁrst beauty pageant recorded in history, as far as we know, and she won, of course. She was on her way to becoming the next queen.

Meanwhile, King Xerxes’s right-hand man, Haman, was getting ticked off" at Esther’s uncle for not bowing down to him, so he manipulated the king into issuing another irrevocable edict, this time to kill all the Jews. (Haman got mad at one guy and decided to wipe out an entire race. It’s probably safe to say that Haman had a lot of pride in him!) Next we see a snapshot of the entire nation of Israel fasting, weeping, and mourning. Fair enough—I would be too if I knew that my entire family was about to be executed! So Mordecai sent a messenger to Esther to “instruct her to go into the king’s presence to beg for mercy and plead with him for her people” (Esther 4:8).

Well, Esther already knew, based on what had happened with the previous queen, that Xerxes was all about following the law to the letter. And one of the laws back then was, “You don’t go to the king. Ever. If the king wants to see you, he summons you. Not the other way around, or you’ll die.” She was faced with a real decision: either go to the king and risk instant death, or wait it out and hope for the best. The only problem was that if she waited it out, it might possibly turn out okay for her, but it certainly was not going to be good for every other Jew in the kingdom. So she sent a message back to Mordecai saying, “I will go” (Esther 4:16).

Those three words, “I will go,” represent bold decisiveness—what it took for her to step out in faith, not knowing what was going to happen, not knowing the end of the story, not even knowing if she was going to make it out alive. It took faith for Esther to boldly decide to get of the fence and take the risk to do what God was calling her to do. I love what Mordecai had said to her just before in verse 14: “And who knows but that you have come to your royal position for such a time as this?”

We see God’s people taking a step of faith time and time again throughout the stories of the Bible: Noah, Moses, Abraham, Joseph, Gideon, Ruth, and so many more. Even in the life of Jesus, it’s clear that he had to come to terms with what his Father called him to
do. Even when you can’t see what’s coming or it looks scary and impossible, take that ﬁrst step of faith, trusting that God will use it, and you, for his purposes.

Once we accept how God made us and what he calls us to accomplish through his power, we ﬁnd it’s pretty easy to be real. We can be genuinely excited about life because we don’t have to pretend to be anything but who we are.

When you embrace who God made you to be and what his plans are for you, when you are able to open your hand to him and say, “Not my will but your will be done,” you’ll discover a whole new level of peace and contentment.

Rick Bezet is the founder and lead pastor of New Life Church in Central Arkansas, listed by Outreach magazine in 2009 as America's fastest-growing church. Today, it includes nine campuses and over twenty weekend worship experiences. A former professional golfer, Rick is one of the founding directors of the Association of Related Churches (ARC), an organization designed to plant churches and impact the world through missions. He speaks across America and around the world, sharing his passion and vision for authentic Christianity. He lives in Arkansas with his wife, Michelle, and their children.