After much soul searching, New York journalists Frederic and Mary Ann Brussat found themselves repeatedly returning to the spiritual practices of compassion, connections, and unity conveyed so beautifully in Thich Nhat Hanh's classic poem "Call Me By My True Names."

This Vietnamese Buddhist monk and peace activist refuses to divide the world into easily identifiable victims and villains. With powerful prose and vivid imagery, he reaches out to take into his heart all those who are suffering — the innocent and the violent, the powerful and the powerless, the oppressed and the oppressors. In "Call Me by My True Names," he practices radical empathy as he identifies with a frog and the snake that eats it, then with a starving child in Uganda and the arms merchant who sells deadly weapons to Uganda. In a very poignant passage, he describes himself as a 12-year-old girl raped by a sea pirate and as the pirate whose "heart [is] not yet capable of seeing and loving." 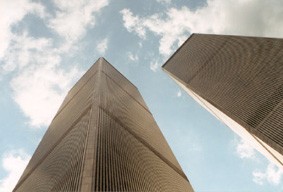 No one, Thich Nhat Hanh demonstrates in this poem, can be excluded from our thoughts and prayers. Even elements of the natural world and things are to be cherished as recipients of our compassion. Even the perpetrators of horrible violence are part of the many names we call ourselves. "Please call me by my true names," he pleads, "so I can see that my joy and pain are one . . . and the door of my heart could be left open, the door of compassion."

Here we offer a new poem, based on his classic.

I am a World Trade Center tower, standing tall in the clear blue sky, feeling a violent blow in my side, and
I am a towering inferno of pain and suffering imploding upon myself and collapsing to the ground.
May I rest in peace.

I am a terrified passenger on a hijacked airplane not knowing where we are going or that I am riding on fuel tanks that will be instruments of death, and
I am a worker arriving at my office not knowing that in just a moment my future will be obliterated.
May I rest in peace.

I am a pigeon in the plaza between the two towers eating crumbs from someone's breakfast when fire rains down on me from the skies, and
I am a bed of flowers admired daily by thousands of tourists now buried under five stories of rubble.
May I rest in peace.

I am a firefighter sent into dark corridors of smoke and debris on a mission of mercy only to have it collapse around me, and
I am a rescue worker risking my life to save lives who is very aware that I may not make it out alive.
May I rest in peace.

I am a survivor who has fled down the stairs and out of the building to safety who knows that nothing will ever be the same in my soul again, and
I am a doctor in a hospital treating patients burned from head to toe who knows that these horrible images will remain in my mind forever.
May I know peace.

I am a tourist in Times Square looking up at the giant TV screens thinking I'm seeing a disaster movie as I watch the Twin Towers crash to the ground, and
I am a New York woman sending e-mails to friends and family letting them know that I am safe.
May I know peace.

I am a piece of paper that was on someone's desk this morning and now I'm debris scattered by the wind across lower Manhattan, and
I am a stone in the graveyard at Trinity Church covered with soot from the buildings that once stood proudly above me, death meeting death.
May I rest in peace.

I am a dog sniffing in the rubble for signs of life, doing my best to be of service, and
I am a blood donor waiting in line to make a simple but very needed contribution for the victims.
May I know peace.

I am a family member who has just learned that someone I love has died, and
I am a pastor who must comfort someone who has suffered a heart-breaking loss.
May I know peace.

I am the owner of a small store with five employees that has been put out of business by this tragedy, and
I am an executive in a multinational corporation who is concerned about the cost of doing business in a terrorized world.
May I know peace.

I am a visitor to New York City who purchases postcards of the World Trade Center Twin Towers that are no more, and
I am a television reporter trying to put into words the terrible things I have seen.
May I know peace.

I am a boy in New Jersey waiting for a father who will never come home, and
I am a boy in a faraway country rejoicing in the streets of my village because someone has hurt the hated Americans.
May I know peace.

I am a general talking into the microphones about how we must stop the terrorist cowards who have perpetrated this heinous crime, and
I am an intelligence officer trying to discern how such a thing could have happened on American soil, and
I am a city official trying to find ways to alleviate the suffering of my people.
May I know peace.

I am a terrorist whose hatred for America knows no limit and I am willing to die to prove it, and
I am a terrorist sympathizer standing with all the enemies of American capitalism and imperialism, and
I am a master strategist for a terrorist group who planned this abomination.
My heart is not yet capable of openness, tolerance, and loving.
May I know peace.

I am a citizen of the world glued to my television set, fighting back my rage and despair at these horrible events, and
I am a person of faith struggling to forgive the unforgivable, praying for the consolation of those who have lost loved ones, calling upon the merciful beneficence of God/Lord/Allah/Spirit/Higher Power.
May I know peace.

I am a child of God who believes that we are all children of God and we are all part of each other.
May we all know peace.