What is Ramadan and Why Do We Celebrate?

Celebrating Ramadan is a way to honor Muhammad, and develop more self-control. 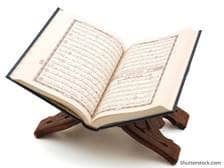 Islam originated in Mecca, and now is the world’s second largest religion, with over a billion followers, and six billion in the US. Muslims believe that Muhammad received revelations from Allah.

Ramadan is celebrated the ninth month of the Muslim calendar. During the last 10 days is special and called the “Night of Power” where the Quran was first revealed to Muhammad.

Celebrating Ramadan is a way to honor Muhammad, and develop more self-control.

This is done through the practice of sawm or fasting from drinking, or eating dawn through dusk. During this fasting one needs to refrain from impure speech, and sexual activities. People who are not physically able to participate must serve the poor, and fast when they can.

After a sunset prayer, this introspection can be broken with a meal with friends and family called the “iftar,” and reinforces family and the brotherhood.

There are five pillars of Islam besides fasting. Prayer is called the Salat, where believers pray five times a day.

There is the Zakat, giving to others and charity. The Shahadah is acknowledging that there is no higher being than God, and Mohammed. Hajj is that all Muslims go to Mecca during their lifetime. After Ramadan, Muslims congratulate each other by saying Kullu am wa antum bi-khair. This means “May you be blessed throughout the year.”

Another reason Ramadan special is it is mandated in the Quran.

"The month of Ramadan in which was revealed the Quran, a guidance for mankind and clear proofs for the guidance and the criterion (between right and wrong). So whoever of you sights (the crescent on the first night of) the month (of Ramadan), he must fast that month, and whoever is ill or on a journey, the same number (of days which one did not fast must be made up) from other days.”