The idea of Jesus tuning into the big game sparked a conversation between me and my husband, former NFL Pro Bowl Safety and current St. Louis Rams' defensive coach Chuck Cecil, about whether God really cares about football. 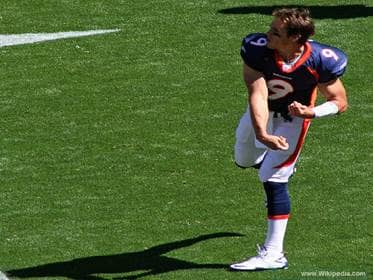 Does God Care about Football?

Fans across the country are getting ready for the most watched sporting event in America, I cannot wonder what God thinks of all of the football madness surrounding the big game day as the Broncos and Panthers battle for a Super Bowl title. As an author, NFL wife and woman who loves God and prays daily (I am not sure what denomination that makes me), the idea of Jesus tuning into the big game sparked a conversation between me and my husband, former NFL Pro Bowl Safety and current St. Louis Rams' defensive coach Chuck Cecil, about whether God really cares about football. I'm not trying to be flippant about faith nor do I want to become an anecdote for folks like Bill Maher, but if the total viewership for the Super Bowl in 2012 was an estimated 113 million and we all know that the Super Bowl will dominate television sets this coming weekend so that number is only going to continue to grow, don't you think God might want to see what the hubbub is all about?

Much like Alice, the protagonist in my new novel, "One Sunday" -- about a broken tabloid editor from Los Angeles who gets knocked-up by a sports doctor and is forced to relocate to the heart of Dixie and strikes up an unlikely friendship with an African-American former NFL player turned pastor and his family -- when I need to go on a spiritual exploration (and sometimes excavation), I Hail Mary the hard questions to our friend Pastor Tim Johnson.

"Absolutely God cares about football!" Pastor Tim kindly laughed at me as he's done for over a decade when I solicit odd-ball questions like: Where have all of the dinosaurs gone? Do you really think Noah got every species of animal on his Ark? "God cares about football because he cares about the people in football." You can see why I like Pastor Tim, can't you? He has a way of making things understandable for the average team player.

Praying for a First Down

On any given Sunday when my husband is coaching on the sidelines in St. Louis, you will find me screaming, yelling and pounding my fists from play-to-play as often as you will catch me praying. I am a praying NFL wife. And I am not ashamed of it. I will pray for just about anything and everything: For our offense to move the chains, for our defense to stop our opponent on third down or for the teenager in front of me to wait until there's a reason to celebrate to thrust his or her foam finger directly into my line of vision.

I understand that genocide, hunger, wars, diseases and human suffering are all on God's plate, and it may seem trivial to pray for a field goal with the clock running out, but to not believe God hears the smallest desires of my heart -- along with everybody else's -- is to underestimate vastly the power of God. My husband's prayers as a coach are different from those he said a NFL player. "In the 1990s I would pray," he explained. "'Lord, please forgive me for what I am about to do'..."

Keep in mind he was categorically a lethal and feared player whose tenacity landed him on the cover of  Sports Illustrated with a caption that read, "Is Chuck Cecil Too Vicious For The NFL?"

"Twenty years later I pray for wisdom, self-control, for the team to perform to the best of our ability and for protection, and safety, for all. But make no mistake, we have come to win." He's quick to point out that the responsibility of winning on the field falls on the coaches and players. "We have to be accountable. Whether God cares about the outcome, I have no idea. But what I do know is, He is greater than winning and losing a football game."

Whether you're on the Broncos or you're rooting for the Panthers, each team is poised to react to the ball. Quarterbacks throw it, running backs tuck it, wide receivers catch it, kickers send it sailing. Even defensive players become innately focused on the ball with the singular goal of stopping their opponent from moving it. Because when the ball ultimately reaches its destination, it ensures points and points accrued determine the winner. The ball is important in the game of football and is critical in the game of life. What you place relevance on or what gives you a feeling of well-being is your ball. We all have a ball. Most Americans' ball is money -- their 401K, a job title, stocks, paycheck, property, etc. It's what you use to put food on your table or gas in your tank. But your ball can also be your health, happiness and spirituality. What many people don't take into account is that at some point, inevitably life will sack you, tackle you, or force you to fumble your ball.

In 2011, my husband was fired from his coaching job in Tennessee. This is nothing new in the NFL, as Jerry Glanville poignantly once explained that the NFL acronym stands for Not For Long. I admit reluctantly that prior to leaving the Titans, my husband and I had gone through a season in our lives where we placed too much of our hopes and attitudes around the game. Perhaps God loves football but he doesn't want us to love it more than we love Him. It was evident that God didn't want us putting anything above Him when it was taken from us.

The uncertainty of the future in the NFL will cart any coach (or player) and their families off the proverbial field if they will let it. As my husband reminds me, "Sometimes your plan and God's plan are vastly different." During the year that we were removed from the game, we had the time to replant our lives on more fertile soil and attach our dreams back on more solid ground. When you build your identity and life around your career, it can be fumbled no matter who you are. If you build your life on God, the rock, when life does intercept your plans and you do fumble, you will have the faith to get up, press on and move the chains of your life.

As much as we are inside the tunnel of the NFL life, my husband and I are fans of the game. We love it and we are blessed to be involved in it. Whenever I ask my husband how he's doing, he'll smile and say, "Living the dream." That dream involves us being able to use our God-given talents and gifts to encourage others. Have we made mistakes along the way? Absolutely. Privately and publicly. But we are committed to practicing and we know we'll just keep getting better.

The bigger question is: Does God care about you? You, the bricklayer, the house cleaner, the fireman, the waitress or the teacher? And you, the public relations executive, the editor, the blogger, the salesman, the secretary or the prisoner? The weak, the weary and the heartbroken? Inequitably, yes!

Check out Carrie on www.carriegerlachcecil.com.