While we don’t know every detail, The Word promises these five things will happen when Jesus returns again. 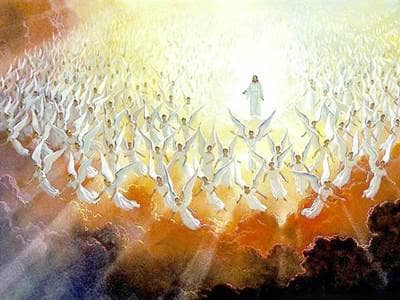 The Second Coming of Jesus regards the future return of Jesus to Earth, following His ascension, when he will defeat the Enemy, destroy evil and establish His millennial kingdom. The second coming is described in Revelation 19:11-16: “I saw heaven standing open and there before me was a white horse whose rider is called Faithful and True. With justice he judges and wages war. His eyes are like blazing fire, and on his head are many crowns. He has a name written on him that no one knows but he himself. He is dressed in a robe dipped in blood, and his name is the Word of God. The armies of heaven were following him, riding on white horses and dressed in fine linen, white and clean. Coming out of his mouth is a sharp sword with which to strike down the nations. ‘He will rule with an iron scepter. He treads the winepress of the fury of the wrath of God Almighty. On his robe and on his thigh he has the name written: King of Kings and Lord of Lords.” As Christians, we believe Jesus will return to earth in fulfillment of His promises and the prophecies also made about Him. Matthew 24:30 talks of this promise “At the time the sign of the Son of Man will appear in the sky, and all the nations of the earth will mourn. They will see the Son of Man coming from the clouds of the sky, with power and great glory.” While we don’t know every detail of Jesus’ return, The Word gives us key information about His second coming, a promise Jesus has made to us. Here are five important facts you should know.

Jesus Will Return from Heaven: Jesus actively spoke of this during His earthly ministry. According to Jesus, the purpose of his ascent to heaven was for the purpose of receiving a kingdom from his Father, while also returning with authority to rule throughout the earth. Matthew 25:31 also tells us that Jesus will not return alone. “When the Son of Man comes in His glory, and all the angels with Him, He will sit on his throne in Heavenly glory.” We’re not just talking a few angels either, but “thousands upon thousands of angels” that will accompany Jesus when He returns.

The Second Coming Is Not the Rapture: While the two are often confused, the second coming is not the rapture. The rapture is when Jesus returns to remove the church from the earth. The church in this context refers to all believers in Christ. It is described in 1 Thessalonians 4:13-18 and 1 Corinthians 15:50:54. At this time, believers who have died and believers who are still alive will be raised together, and meet the Lord in the sky as an act of deliverance. The second coming speaks of the return of Jesus to triumph over evil where he will establish his Millennial kingdom. While it is not always easy to differentiate the two when reading Scripture, distinguishes between the two is important. Both include the return of Jesus and both are end-time events. In short, the rapture involves removing all believers from the earth before God’s wrath. The second coming marks the return of Christ to bring an end to tribulation by defeating the Enemy. Many things must occur before Jesus’ second coming.

We Won’t Know The Time: Many people have attempted to pinpoint the time of Christ’s return and each has failed. Jesus told his disciples on the Mount of Olives, referenced in Matthew 24:36 that “No one know about the day or the hour,” so it is impossible to pinpoint the exact day or time of Jesus’ return. However, we are told by Jesus that we will know when His return is near. “And then the sign of the Son of Man will appear in the sky, and then all the tribes of earth will mourn, and they will see the Son of Man coming on the clouds of the sky with power and great glory. And He will send forth His angels with a great trumpet and they will gather together His elect from the four winds, from one end of the sky to the other.” These signs will point to his return.

It Will Be Visible and Audible: When Jesus returns, it will be universally visible and audible. Matthew 24:31 speaks of “a great sound of a trumpet” that stretches from “one end of heaven to the other.” 1 Thessalonians 4:16 also speaks of great sound. “For the Lord Himself shall descend from heaven with a shout, with the voice of the archangel and with the trumpet of God.” Revelation tells us that He will be universally seen. “Behold, he cometh with clouds; and every eye shall see him” (Revelation 1:7). We are warned by Jesus against false comings. A reference to this can be found in Matthew 24:26-27 “So if anyone tells you, ‘There he is, out in the wilderness,’ do not go out; or, ‘Here he is, in the inner rooms,’ do not believe it.

For as lightening that comes from the east is visible even in the west, so will be the coming of the Son on Man.”

His Return Will Be Different than the First: We are told in Scripture that the second coming of Jesus will be “with power and great glory.” During Jesus’ first coming, he humbled himself, being born in a stable in Bethlehem and living a life on earth with great humility. However, upon his return, the will come back as pronounced King of Kings and Lord or Lords. On this day, in a triumphant return, the whole world will see and know who Jesus really was. Humility stands out in Jesus’ first coming. Glory stands out in his second. His return will be triumphant, marked with the powerful accompaniment of angels and saints.