Diwali Comes to America: A Step at a Time...

American Hindu children are missing out on the important Diwali holiday due to school, but slowly they're getting more support. 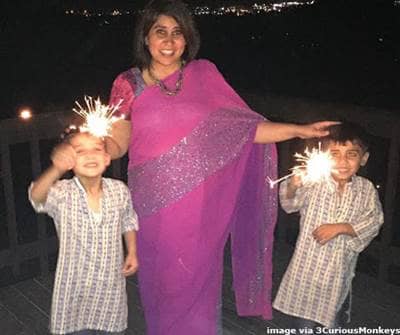 Imagine, in India Diwali is a year-long anticipated event which is crowned with three days of Diwali holidays - everyone celebrates from teachers to students to entire families! But that is in India where the cities and towns are lit up like fairylands and temples see throngs of visitors. It is one grand celebration.

It's a different story in America.

Diwali often falls on a weekday, and for children it's a full school-day with mounds of homework and school activities to get through. Parents wistfully remember their own fireworks and holiday based fun-packed Diwali in India and try to recreate as much of that golden time as possible for their kids. But in America it's a school day and no tampering with fireworks!

The Hindu American Foundation (HAF) had joined with 40 organizations and temples in New York to urge the Mayor to declare Diwali a public holiday. In spite of varied attempts, Diwali is still not a school holiday while the Muslim festival of Eid finally has made the list.

“While the addition of two Muslim holidays is commendable, the Mayor’s decision to exclude Diwali, a festival that is celebrated by thousands of Hindus, Jains, and Sikhs in NYC is beyond disappointing,” HAF Senior Director Sheetal Shah told media.

So this year too, Hindu children will have to juggle Diwali with their other school activities. Advocates of a Diwali holiday have finally had success in one school district in New Jersey and these kids will be able to enjoy the celebrations fully. These victories are indeed hard-won. Imagine a Christian not being able to celebrate Christmas due to it being a regular school day and you get a sense of how a major religious holiday is being under-played and undervalued.

Hindus in their heart know how important their festival, with its emphasis on the triumph of good over evil, of light over darkness really is, but it always helps believers, especially the younger generation, when they see their big day is regarded as important by their friends and by society too.

When President Obama recognizes Diwali from the White House, when even a commercial outlet like Macy's installs a Diwali sale, as it did a few years ago, there is a feeling of joy and validation. When Nidhi Katuria, a NJ based filmmaker walked into Macy's, she stopped, stunned. This all red and blue quintessential American department store was actually showcasing Diwali festive decor and a big poster ‘Happy Diwali’. “I felt an overwhelming feeling in my heart, like it smiled,” says Kathuria.

The Metropolitan Museum of Art, for instance, has been celebrating Diwali in a big way as a draw for its multicultural audiences. There are India-related exhibits as well as events for children including a full Ram Leela ballet which tells the story of the Ramayana through dance. This is a commendable effort by the Met to bring in a beautiful epic to the doorstep of all its visitors and share art, culture and dance through this performance art. Thousands will get to see a depiction of the triumph of Rama over the ten-headed demon Ravana at this special Diwali celebration for families at the Met.

Fortunately for Hindus living in the US, there are many temples, regional associations and organizations making every attempt to ensure Diwali is celebrated in a big way. There are prayers and ceremonies at every temple, and many private and public parties too. Social media has made it easy to get the word about such events and caterers, restaurants, musicians and performers are having a busy time keeping up with all the demand.

Indian-Americans being an innovative lot are coming up with their own creative celebrations of Diwali too. Vimana, a community of lightworkers in New York, are having a Prosperity Ceremony and Dinner with Ganesh blessing, Diwali mantras, and a Visioning ceremony. Guests will be served a vegetarian, 'high vibrational' South Indian dosas, made fresh and served with accompaniments on banana leaves and there will be stories of Laxmi through song, accompanied by live tabla and violin music and dancers.

Being many thousands of miles away from the source, the challenge is always to keep Hinduism alive and strong for the next generation. There are many dance schools in the US which do special performances for Diwali. The Aalokam School in Brooklyn introduces chldren to their cultural roots. An initiative by them this Diwali was Sparkles and Steps, a kids Diwali event with rungoli, Dandia Raas, lighting of diyas (earthen lamps) and interactive story-telling.

Two young Hindu professionals who have taken this task very seriously are Shweta Chopra and Suchi Mehta. Aware that there isn't enough culturally suitable material out there for their own children, they have formed a publishing company 3CuriousMonkeys and co-authored 'The Diwali Gift' - their first book on Diwali. Says Chopra, " Our research indicated that while there were many stories with popular mythological characters, there were very few that focused on the rituals and hardly any with a fun adventure which kids enjoy".

Since Diwali celebrations in schools especially outside of India are usually a parent driven initiative, they say teachers need to have the resources to talk about the festival. The two entrepreneurs worked with a top curriculum designer from Stanford University to develop a Common Core guided lesson plan on Diwali.

"We are working with several school districts who are open to sharing the lesson plan and are already using it in their classrooms, " says Chopra. "We hope that more and more teachers and parents can use this free resource to take Diwali outside our homes and share it with their multicultural communities."

And so it is, one by one will these lamps for Diwali be lit, and the Festival of Lights will brighten up the lives of children with knowledge of their roots and culture.

Lavina Melwani is a New York based writer for several international publications and blogs at http://www.lassiwithlavina.com . Follow @lavinamelwani