Who Is the Founder of Christianity?

Was the Apostle Paul the founder of Christianity, or did he simply reinvent it? 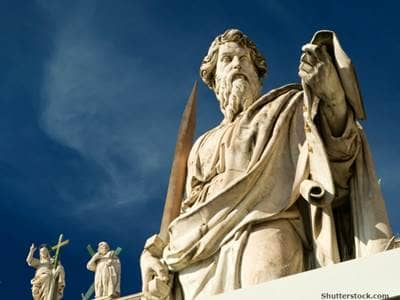 The story of Jesus and early Christianity continues to be a subject of public interest and who founded Christianity continues to be debated. When we look at the beginning of Christianity, two figures come into play: Jesus and Paul. While Jesus is viewed by many Christians as the founder of the religion whose life events laid the groundwork of Christianity, Paul is viewed as the great interpreter of Jesus’ mission, arguably one of the most important and influential figures in our history, delivering that mission in a way no one had before.

When the question is posed, many Christians would argue that Jesus founded Christianity. Christianity by definition is the religion based on the person and teachings of Jesus of Nazareth. And when it comes to authenticity, how can you not name Jesus. Without Jesus and His early teachings, Paul would have no message to spread. Many skeptics also argue that Paul hijacked the early Christian religion, changing the theology of what Jesus originally taught. But is there merit to this? If you think so, I wouldn’t so fast. It’s important to look at Paul’s story to get the answer.

Christians believe that Paul met Jesus on a trip to persecute Christians in Damascus. Paul, whose original name was Saul, was a Pharisee, proud men not in agreement with Jesus’ teachings. On that trip, Paul was struck blind for three days and waited for one of Jesus’ followers to heal him. After being healed, he was transformed and spread the Gospel to the Jews and Gentiles. That Gospel included messages related to the atonement of sin through Jesus’ death on the cross, and understanding that promise through faith, in line with Jesus’ message. If Paul was trying to hijack the religion, why wouldn’t he stray from Jesus’ teachings or message?

It’s also important to remember that neither Jesus nor Paul was trying to start a religion. They were both trying to deliver a powerful message related to our Heavenly Father. N.T. Wright, a world authority on the life and letters of Paul, argues in his book "What Saint Paul Really Said: Was Paul of Tarsus the Real Founder of Christianity” that “The post-enlightenment box into which `religion' has been slotted has nothing to do with the worldview of a first-century Jew believing that Israel's God, the creator, was taking his power and reigning. Jesus was not announcing `a new religion'; nor was Paul. Of course the proclamation of Jesus, and the gospel announcement of Paul, addressed human beings with a challenge and a summons, which went down to the very depths of human experience, awakening parts which other messages could not reach. But they did this because the claim of Israel, the message of Jesus, and the announcement of Paul always was, that the human race was to be shown the true way of being human. If that is what you mean by `religion', so be it. Jesus and Paul thought of it as Life, as being human, as being the children of God.” Paul and Jesus spread a powerful message about us being children of God, greatly in line with each other.

In short, Christianity as we know it today was not founded by Jesus. The doctrines of Christianity primarily come from Paul’s teaching. Jesus was a foundation, Paul a powerful witness. Without Jesus, there would be no foundation for Christianity, but without Paul, Christians could not understand Jesus’ life and death, especially relation to the Salvation. Paul transformed the beliefs and message of Jesus into a powerful movement in which we owe much of Christianity’s history to.

Lesli White is a Writer at Larger for Beliefnet.com