When Was Jesus Really Born?

The Christmas story has become synonymous with the date, December 25. Whether you’re listening to carols or looking at nativity scene imagery, the idea that Christmas is His birthday is everywhere. But what has become popular belief isn’t exactly true to history.

The Gospel of Matthew and the Gospel of Luke are the only two accounts of Jesus’ birth in the New Testament, and both gospels show different angles of the story. Luke begins in Nazareth and Matthew focuses solely on events in Bethlehem. Both aren’t particularly detailed in terms of a calendar date, which makes determining Jesus’ birthday quite tough. The writers of the gospels rarely tell you when things happened and the time of year.

Scripture tells us that, “[Mary] gave birth to her firstborn, a son. She wrapped Him in cloths and placed Him in a manger, because there was no guest room available for them. And there were shepherds living out in the fields nearby, keeping watch over their flocks at night” (Luke 2:7-8). But shepherds were not in the fields during December. Luke’s account suggests that Jesus may have been born in summer or early fall. In December, Judea is cold and rainy, so it is likely the shepherds would have sought shelter for their flocks at night. The weather would not have permitted shepherds watching over their flocks in the field at night.

Jesus’ Parents Came to Bethlehem to Register in a Roman Census

The census or enrollment which according to Luke 2:1 was the occasion of the journey of Joseph and Mary to Bethlehem where Jesus was born, is connected with a decree of Augustus, embracing the Greek-Roman world. Luke carefully distinguishes the census at the time of Jesus’ birth as “first,” in a series of enrollments connected wither with Quirinius or with the imperial policy inaugurated by the decree of Augustus. Because temperatures often dropped below freezing and roads were in poor conditions, the census was not taken in winter. This time of year didn’t permit it.

Winter Would Be a Difficult Time for Mary to Travel

Mary was traveling the long distance from Nazareth to Bethlehem which was about 70 miles. Winter would likely be an especially difficult time for a pregnant Mary to travel such a long distance. The world of Mary and Joseph was a difficult and dangerous place, one whose harsh conditions were not fully chronicled in the Gospel accounts of their travails. Writers of the gospels of Matthew and Luke “are so laconic about the [Nativity] event because they assume the reader would know what it was like,” said James F. Strange, a New Testament and biblical archaeology professor at the University of South Florida in Tampa. “We have no idea how difficult it was.” Strange estimates that Joseph and Mary likely would have traveled only 10 miles a day because of Mary’s impending delivery.

The time of year that Jesus was born continues to be a huge subject of debate, particularly the month of Jesus’ birth. Many biblical scholars believe Scripture points to the fall of the year as the most likely time of Jesus’ birth. In 2008, astronomer Dave Reneke argued that Jesus was born in the summer. Reneke told New Scientist the Star of Bethlehem may have been Venus and Jupiter coming together to form a bright light in the sky. Using computer models, Reneke determined that this rare event occurred on June 17, in the year 2 B.C. Other researchers have claimed that a similar conjunction, one between Saturn and Jupiter occurred in October of 7 B.B., making Jesus an autumn baby.

Theologians have also suggested that Jesus was born in the spring, based on the biblical narrative that shepherds were watching over their flocks in the fields on the night of Jesus’ birth – something they would have done in the spring, not the winter. The Bible nowhere points to Jesus being born in mid-winter. Unfortunately, nobody really knows exactly when Jesus was born.

The main focus of the New Testament writers is not the date of Jesus’ birth, but that God the Father has sent His son at just the right time in all of history to accomplish His saving purposes and thus fulfill His promise. The apostle Paul proclaimed, “When the set time had dully come, God sent His son, born of a woman, born under the law to redeem those under the law, that we might receive adoption to sonship” (Galatians 4:4-5). And we read in the Gospel of Mark, “Jesus went into Galilee, proclaiming the news of God. ‘The time has come,’ He said. ‘The kingdom of God has come near. Repent and believe the good news!” (Matthew 1:14-15). 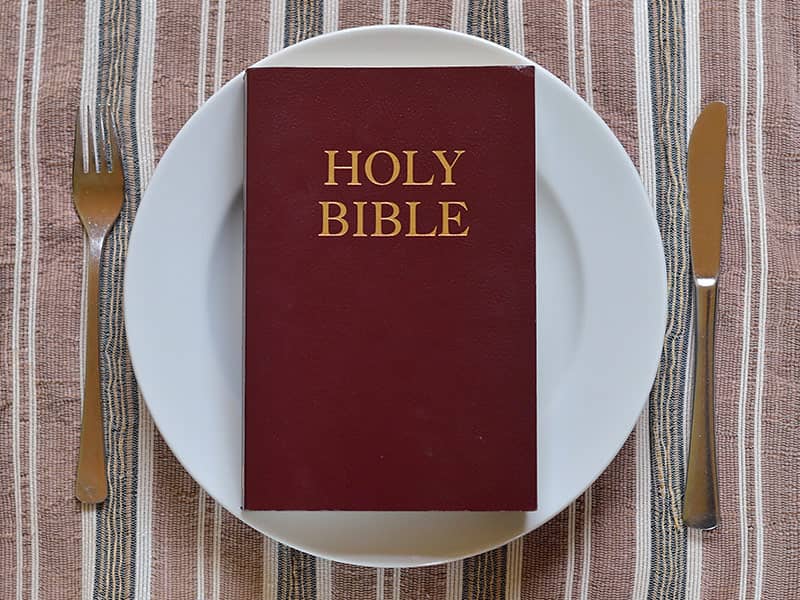 How to Fast According to the Bible