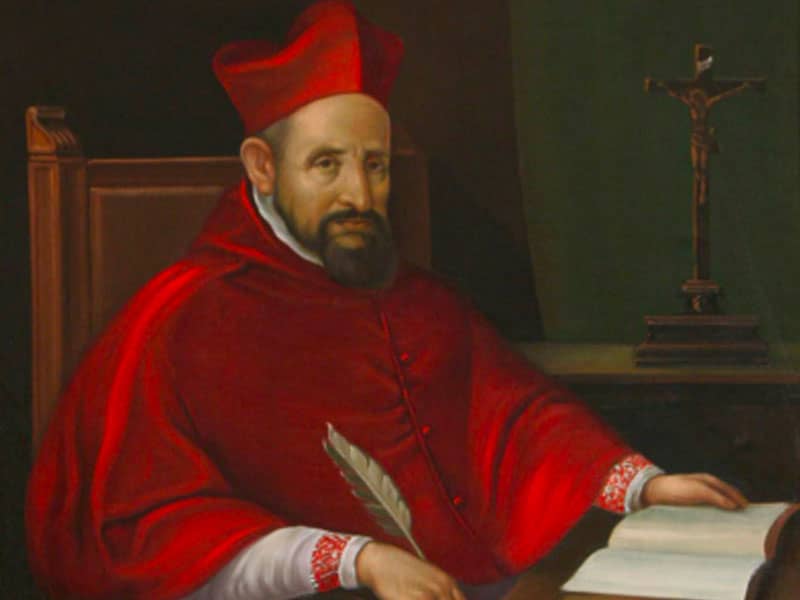 When Robert Bellarmine was ordained in 1570, the study of Church history and the Fathers of the Church was in a sad state of neglect. A promising scholar from his youth in Tuscany, he devoted his energy to these two subjects, as well as to Scripture, in order to systematize Church doctrine against the attacks of the Protestant Reformers. He was the first Jesuit to become a professor at Louvain.

His most famous work is his three-volume Disputations on the Controversies of the Christian faith. Particularly noteworthy are the sections on the temporal power of the pope and the role of the laity. He incurred the anger of both England and France by showing the divine-right-of-kings theory untenable. He developed the theory of the indirect power of the pope in temporal affairs; although he was defending the pope against the Scottish philosopher Barclay, he also incurred the ire of Pope Sixtus V.

Bellarmine was made a cardinal by Pope Clement VIII on the grounds that "he had not his equal for learning." While he occupied apartments in the Vatican, Bellarmine relaxed none of his former austerities. He limited his household expenses to what was barely essential, eating only the food available to the poor. He was known to have ransomed a soldier who had deserted from the army and he used the hangings of his rooms to clothe poor people, remarking, "The walls won't catch cold."

Among many activities, he became theologian to Pope Clement VIII, preparing two catechisms which have had great influence in the Church.

The last major controversy of Bellarmine's life came in 1616 when he had to admonish his friend Galileo, whom he admired. Bellarmine delivered the admonition on behalf of the Holy Office, which had decided that the heliocentric theory of Copernicus was contrary to Scripture. The admonition amounted to a caution against putting forward—other than as a hypothesis—theories not yet fully proved. It was an example of the fact that saints are not infallible.

Bellarmine died on September 17, 1621. The process for his canonization was begun in 1627 but was delayed for political reasons, stemming from his writings, until 1930. In 1931 Pius XI declared him a Doctor of the Church.