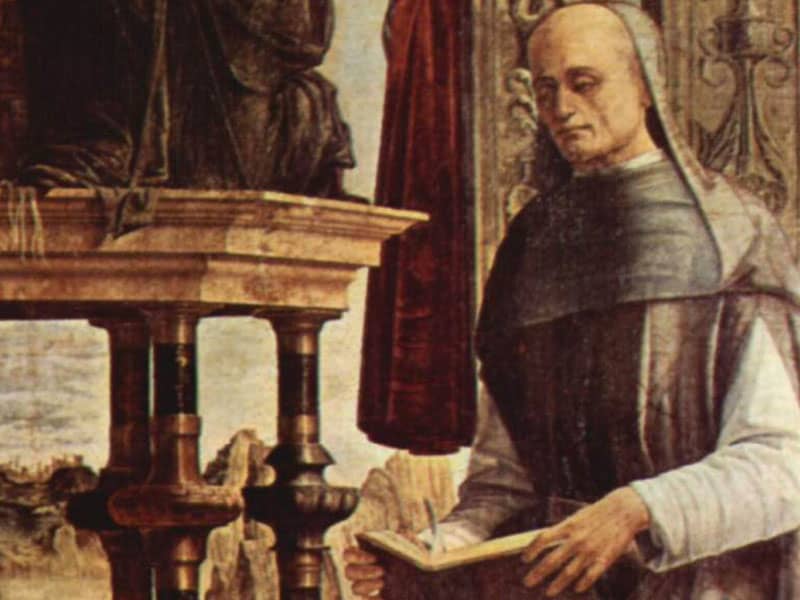 Maybe because he was orphaned and had been treated shabbily by one of his brothers, Peter Damian was very good to the poor. It was the ordinary thing for him to have a poor person or two with him at table and he liked to minister personally to their needs.

Peter escaped poverty and the neglect of his own brother when his other brother, who was archpriest of Ravenna, took him under his wing. His brother sent him to good schools and Peter became a professor.

Already in those days Peter was very strict with himself. He wore a hair shirt under his clothes, fasted rigorously and spent many hours in prayer. Soon, he decided to leave his teaching and give himself completely to prayer with the Benedictines of the reform of St. Romuald at Fonte Avellana. They lived two monks to a hermitage. Peter was so eager to pray and slept so little that he soon suffered from severe insomnia. He found he had to use some prudence in taking care of himself. When he was not praying, he studied the Bible.

The abbot commanded that when he died Peter should succeed him. Abbot Peter founded five other hermitages. He encouraged his brothers in a life of prayer and solitude and wanted nothing more for himself. The Holy See periodically called on him, however, to be a peacemaker or troubleshooter, between two abbeys in dispute or a cleric or government official in some disagreement with Rome.

Finally, Pope Stephen IX made Peter the cardinal-bishop of Ostia. He worked hard to wipe out simony, and encouraged his priests to observe celibacy and urged even the diocesan clergy to live together and maintain scheduled prayer and religious observance. He wished to restore primitive discipline among religious and priests, warning against needless travel, violations of poverty and too comfortable living. He even wrote to the bishop of Besancon, complaining that the canons there sat down when they were singing the psalms in the Divine Office.

He wrote many letters. Some 170 are extant. We also have 53 of his sermons and seven lives, or biographies, that he wrote. He preferred examples and stories rather than theory in his writings. The liturgical offices he wrote are evidence of his talent as a stylist in Latin.

He asked often to be allowed to retire as cardinal-bishop of Ostia, and finally Alexander II consented. Peter was happy to become once again just a monk, but he was still called to serve as a papal legate. When returning from such an assignment in Ravenna, he was overcome by a fever. With the monks gathered around him saying the Divine Office, he died on February 22, 1072.

In 1828 he was declared a Doctor of the Church.