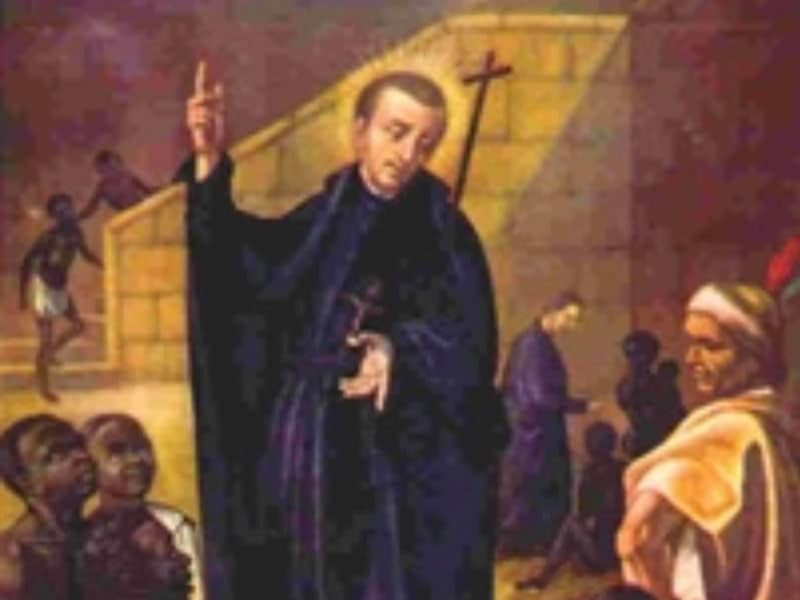 A native of Spain, young Jesuit Peter Claver left his homeland forever in 1610 to be a missionary in the colonies of the New World. He sailed into Cartagena (now in Colombia), a rich port city washed by the Caribbean. He was ordained there in 1615.

By this time the slave trade had been established in the Americas for nearly 100 years, and Cartagena was a chief center for it. Ten thousand slaves poured into the port each year after crossing the Atlantic from West Africa under conditions so foul and inhuman that an estimated one-third of the passengers died in transit. Although the practice of slave-trading was condemned by Pope Paul III and later labeled "supreme villainy" by Pius IX, it continued to flourish.

Peter Claver's predecessor, Jesuit Father Alfonso de Sandoval, had devoted himself to the service of the slaves for 40 years before Claver arrived to continue his work, declaring himself "the slave of the Negroes forever."

As soon as a slave ship entered the port, Peter Claver moved into its infested hold to minister to the ill-treated and miserable passengers. After the slaves were herded out of the ship like chained animals and shut up in nearby yards to be gazed at by the crowds, Claver plunged in among them with medicines, food, bread, brandy, lemons and tobacco. With the help of interpreters he gave basic instructions and assured his brothers and sisters of their human dignity and God's saving love. During the 40 years of his ministry, Claver instructed and baptized an estimated 300,000 slaves.

His apostolate extended beyond his care for slaves. He became a moral force, indeed, the apostle of Cartagena. He preached in the city square, gave missions to sailors and traders as well as country missions, during which he avoided, when possible, the hospitality of the planters and owners and lodged in the slave quarters instead.

After four years of sickness which forced the saint to remain inactive and largely neglected, he died on September 8, 1654. The city magistrates, who had previously frowned at his solicitude for the black outcasts, ordered that he should be buried at public expense and with great pomp.

He was canonized in 1888, and Pope Leo XIII declared him the worldwide patron of missionary work among black slaves.