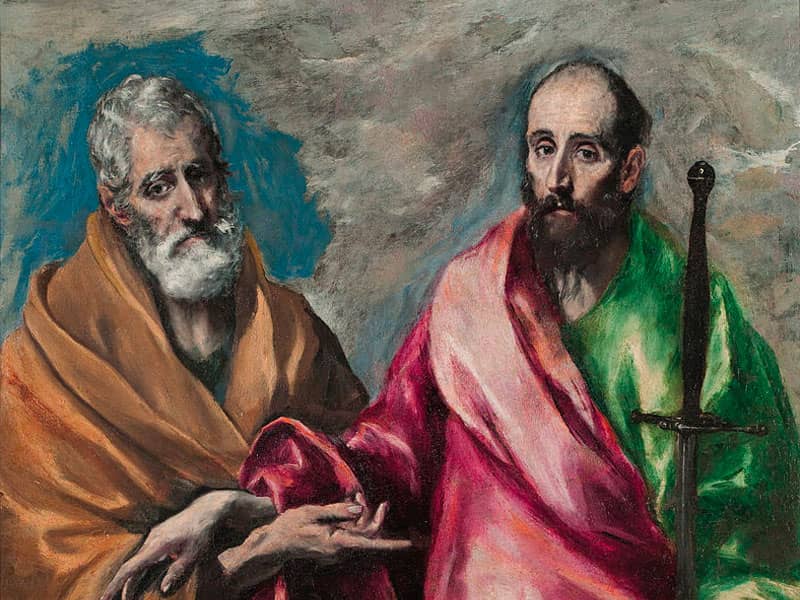 Peter: St. Mark ends the first half of his Gospel with a triumphant climax. He has recorded doubt, misunderstanding and the opposition of many to Jesus. Now Peter makes his great confession of faith: "You are the Messiah" (Mark 8:29b). It was one of the many glorious moments in Peter's life, beginning with the day he was called from his nets along the Sea of Galilee to become a fisher of men for Jesus.

The New Testament clearly shows Peter as the leader of the apostles, chosen by Jesus to have a special relationship with him. With James and John he was privileged to witness the Transfiguration, the raising of a dead child to life and the agony in Gethsemane. His mother-in-law was cured by Jesus. He was sent with John to prepare for the last Passover before Jesus' death. His name is first on every list of apostles.

And to Peter only did Jesus say, "Blessed are you, Simon son of Jonah. For flesh and blood has not revealed this to you, but my heavenly Father. And so I say to you, you are Peter, and upon this rock I will build my church, and the gates of the nether world shall not prevail against it. I will give you the keys to the kingdom of heaven. Whatever you bind on earth shall be bound in heaven; and whatever you loose on earth shall be loosed in heaven" (Matthew 16:17b-19).

But the Gospels prove their own veracity by the unflattering details they include about Peter. He clearly had no public relations person. It is a great comfort for ordinary mortals to know that Peter also has his human weakness, even in the presence of Jesus.

He generously gave up all things, yet he can ask in childish self-regard, "What are we going to get for all this?" (see Matthew 19:27). He receives the full force of Christ's anger when he objects to the idea of a suffering Messiah: "Get behind me, Satan! You are an obstacle to me. You are thinking not as God does, but as human beings do" (Matthew 16:23b).

Peter is willing to accept Jesus' doctrine of forgiveness, but suggests a limit of seven times. He walks on the water in faith, but sinks in doubt. He refuses to let Jesus wash his feet, then wants his whole body cleansed. He swears at the Last Supper that he will never deny Jesus, and then swears to a servant maid that he has never known the man. He loyally resists the first attempt to arrest Jesus by cutting off Malchus's ear, but in the end he runs away with the others. In the depth of his sorrow, Jesus looks on him and forgives him, and he goes out and sheds bitter tears.

Paul: If Billy Graham suddenly began preaching that the United States should adopt Marxism and not rely on the Constitution, the angry reaction would help us understand Paul's life when he started preaching that Christ alone can save us. He had been the most Pharisaic of Pharisees, the most legalistic of Mosaic lawyers. Now he suddenly appears to other Jews as a heretical welcomer of Gentiles, a traitor and apostate.

Paul's central conviction was simple and absolute: Only God can save humanity. No human effort—even the most scrupulous observance of law—can create a human good which we can bring to God as reparation for sin and payment for grace. To be saved from itself, from sin, from the devil and from death, humanity must open itself completely to the saving power of Jesus.

Paul never lost his love for his Jewish family, though he carried on a lifelong debate with them about the uselessness of the Law without Christ. He reminded the Gentiles that they were grafted on the parent stock of the Jews, who were still God's chosen people, the children of the promise.

In light of his preaching and teaching skills, Paul's name has surfaced (among others) as a possible patron of the Internet.