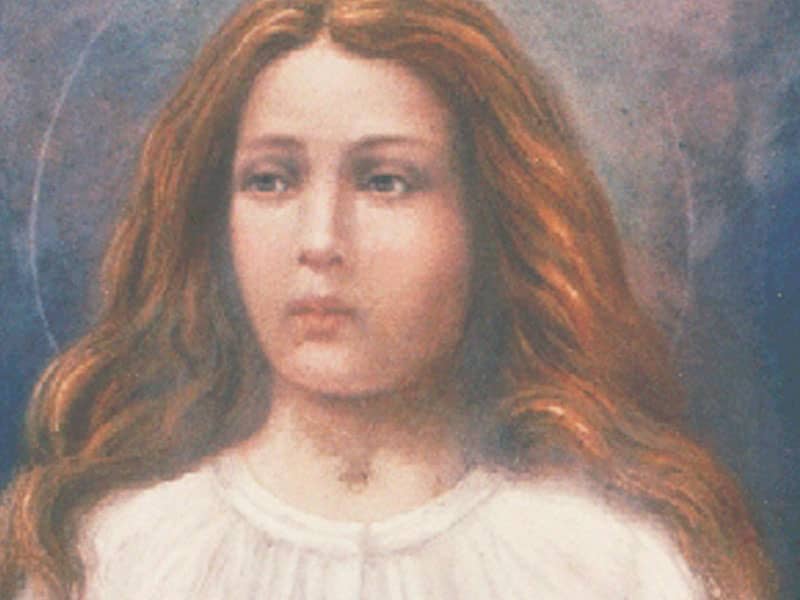 One of the largest crowds ever assembled for a canonization—250,000—symbolized the reaction of millions touched by the simple story of Maria Goretti.

She was the daughter of a poor Italian tenant farmer, had no chance to go to school, never learned to read or write. When she made her First Communion not long before her death at age 12, she was one of the larger and somewhat backward members of the class.

On a hot afternoon in July, Maria was sitting at the top of the stairs of her house, mending a shirt. She was not quite 12 years old, but physically mature. A cart stopped outside, and a neighbor, Alessandro, 18 years old, ran up the stairs. He seized her and pulled her into a bedroom. She struggled and tried to call for help, gasping that she would be killed rather than submit. “No, God does not wish it. It is a sin. You would go to hell for it.” Alessandro began striking at her blindly with a long dagger.

She was taken to a hospital. Her last hours were marked by the usual simple compassion of the good—concern about where her mother would sleep, forgiveness of her murderer (she had been in fear of him, but did not say anything lest she cause trouble to his family) and her devout welcoming of Viaticum. She died about 24 hours after the attack.

Her murderer was sentenced to 30 years in prison. For a long time he was unrepentant and surly. One night he had a dream or vision of Maria, gathering flowers and offering them to him. His life changed. When he was released after 27 years, his first act was to go to beg the forgiveness of Maria’s mother.

Devotion to the young martyr grew, miracles were worked, and in less than half a century she was canonized. At her beatification in 1947, her mother (then 82), two sisters and a brother appeared with Pope Pius XII on the balcony of St. Peter’s. Three years later, at her canonization, a 66-year-old Alessandro Serenelli knelt among the quarter-million people and cried tears of joy.