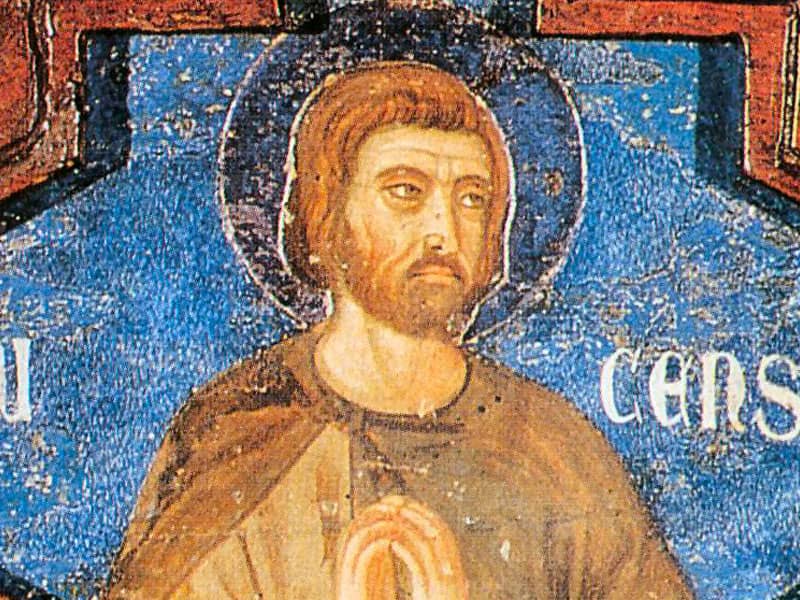 Luchesio and his wife Buonadonna wanted to follow St. Francis as a married couple. Thus they set in motion the Secular Franciscan Order.

Luchesio and Buonadonna lived in Poggibonzi where he was a greedy merchant. Meeting Francis—probably in 1213—changed his life. He began to perform many works of charity.

At first Buonadonna was not as enthusiastic about giving so much away as Luchesio was. One day after complaining that he was giving everything to strangers, Buonadonna answered the door only to find someone else needing help. Luchesio asked her to give the poor man some bread. She frowned but went to the pantry anyway. There she discovered more bread than had been there the last time she looked. She soon became as zealous for a poor and simple life as Luchesio was. They sold the business, farmed enough land to provide for their needs and distributed the rest to the poor.

In the 13th century some couples, by mutual consent and with the Church’s permission, separated so that the husband could join a monastery (or a group such as Francis began) and his wife could go to a cloister. Conrad of Piacenza and his wife did just that. This choice existed for childless couples or for those whose children had already grown up. Luchesio and Buonadonna wanted another alternative, a way of sharing in religious life, but outside the cloister.

The charity of Luchesio drew the poor to him, and, like many other saints, he and Buonadonna seemed never to lack the resources to help these people.

One day Luchesio was carrying a crippled man he had found on the road. A frivolous young man came up and asked, "What poor devil is that you are carrying there on your back?" "I am carrying my Lord Jesus Christ," responded Luchesio. The young man immediately begged Luchesio’s pardon.

Luchesio and Buonadonna both died on April 28, 1260. He was beatified in 1273. Local tradition referred to Buonadonna as "blessed" though the title was not given officially.