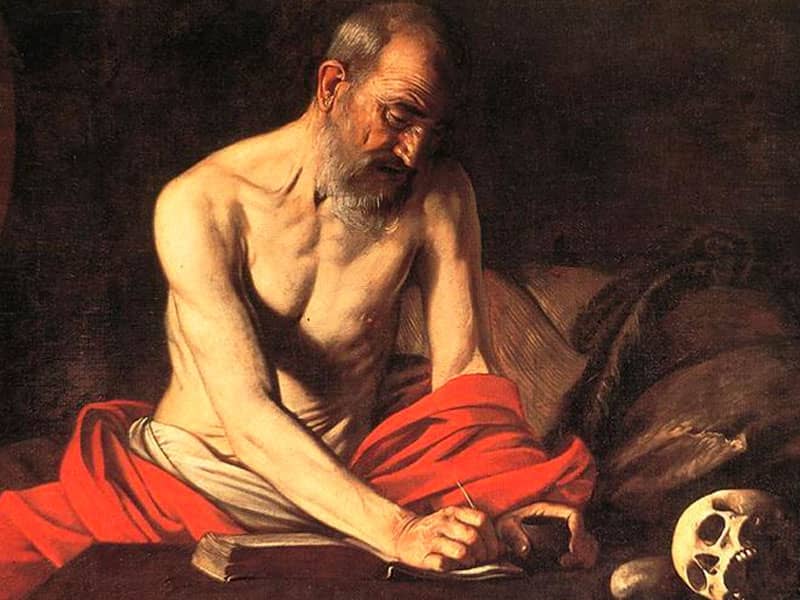 Most of the saints are remembered for some outstanding virtue or devotion which they practiced, but Jerome is remembered too frequently for his bad temper! It is true that he had a very bad temper and could use a vitriolic pen, but his love for God and his Son Jesus Christ was extraordinarily intense; anyone who taught error was an enemy of God and truth, and St. Jerome went after him or her with his mighty and sometimes sarcastic pen.

He was above all a Scripture scholar, translating most of the Old Testament from the Hebrew. He also wrote commentaries which are a great source of scriptural inspiration for us today. He was an avid student, a thorough scholar, a prodigious letter-writer and a consultant to monk, bishop and pope. St. Augustine said of him, "What Jerome is ignorant of, no mortal has ever known."

St. Jerome is particularly important for having made a translation of the Bible which came to be called the Vulgate. It is not the most critical edition of the Bible, but its acceptance by the Church was fortunate. As a modern scholar says, "No man before Jerome or among his contemporaries and very few men for many centuries afterwards were so well qualified to do the work." The Council of Trent called for a new and corrected edition of the Vulgate, and declared it the authentic text to be used in the Church.

In order to be able to do such work, Jerome prepared himself well. He was a master of Latin, Greek, Hebrew and Chaldaic. He began his studies at his birthplace, Stridon in Dalmatia (in the former Yugoslavia). After his preliminary education he went to Rome, the center of learning at that time, and thence to Trier, Germany, where the scholar was very much in evidence. He spent several years in each place, trying always to find the very best teachers.

After these preparatory studies he traveled extensively in Palestine, marking each spot of Christ's life with an outpouring of devotion. Mystic that he was, he spent five years in the desert of Chalcis so that he might give himself up to prayer, penance and study. Finally he settled in Bethlehem, where he lived in the cave believed to have been the birthplace of Christ. On September 30 in the year 420, Jerome died in Bethlehem. The remains of his body now lie buried in the Basilica of St. Mary Major in Rome.