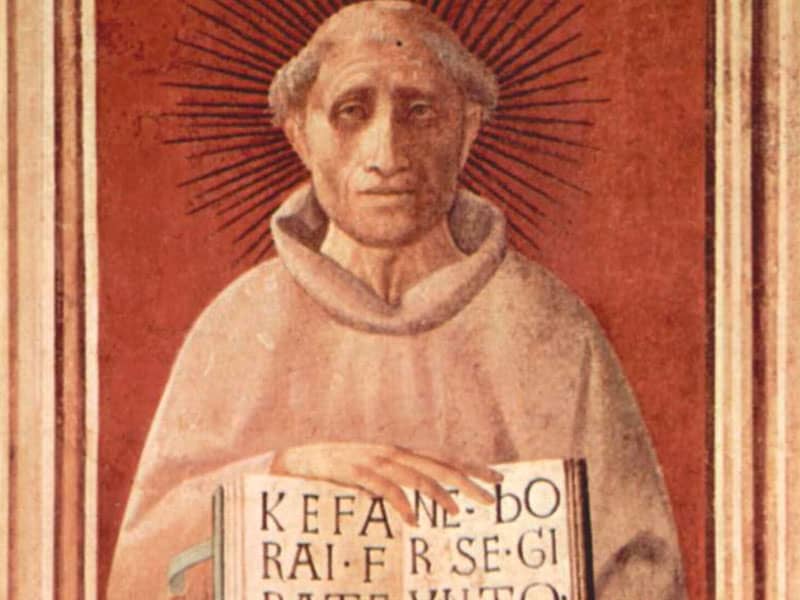 Jacomo, or James, was born a noble member of the Benedetti family in the northern Italian city of Todi. He became a successful lawyer and married a pious, generous lady named Vanna.

His young wife took it upon herself to do penance for the worldly excesses of her husband. One day Vanna, at the insistence of Jacomo, attended a public tournament. She was sitting in the stands with the other noble ladies when the stands collapsed. Vanna was killed. Her shaken husband was even more disturbed when he realized that the penitential girdle she wore was for his sinfulness. On the spot, he vowed to radically change his life.

He divided his possessions among the poor and entered the Third Order of St. Francis. Often dressed in penitential rags, he was mocked as a fool and called Jacopone, or "Crazy Jim," by his former associates. The name became dear to him.

After 10 years of such humiliation, Jacopone asked to be a member of the Franciscan Order. Because of his reputation, his request was initially refused. He composed a beautiful poem on the vanities of the world, an act that eventually led to his admission into the Order in 1278. He continued to lead a life of strict penance, declining to be ordained a priest. Meanwhile he was writing popular hymns in the vernacular.

Jacopone suddenly found himself a leader in a disturbing religious movement among the Franciscans. The Spirituals, as they were called, wanted a return to the strict poverty of Francis. They had on their side two cardinals of the Church and Pope Celestine V. These two cardinals, though, opposed Celestine’s successor, Boniface VIII. At the age of 68, Jacopone was excommunicated and imprisoned. Although he acknowledged his mistake, Jacopone was not absolved and released until Benedict XI became pope five years later. He had accepted his imprisonment as penance. He spent the final three years of his life more spiritual than ever, weeping "because Love is not loved." During this time he wrote the famous Latin hymn, Stabat Mater.

On Christmas Eve in 1306 Jacopone felt that his end was near. He was in a convent of the Poor Clares with his friend, Blessed John of La Verna. Like Francis, Jacopone welcomed "Sister Death" with one of his favorite songs. It is said that he finished the song and died as the priest intoned the Gloria from the midnight Mass at Christmas. From the time of his death, Brother Jacopone has been venerated as a saint.