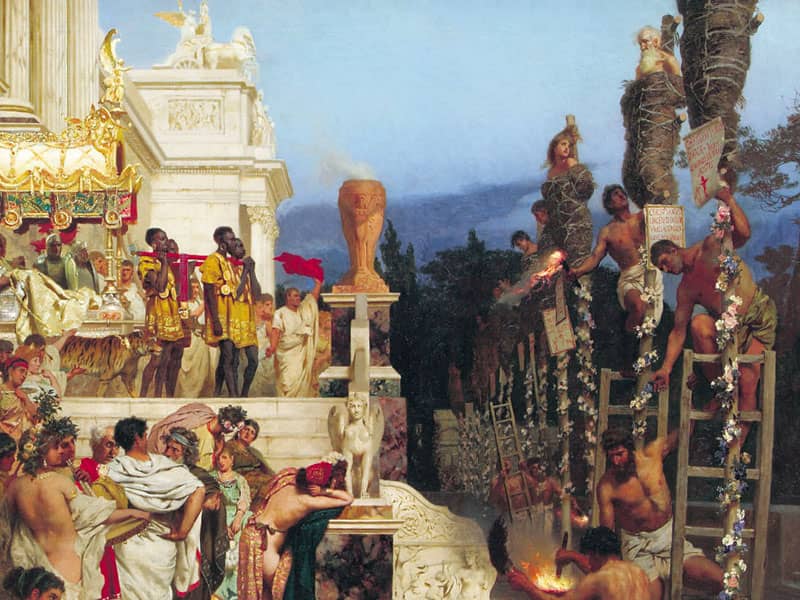 There were Christians in Rome within a dozen or so years after the death of Jesus, though they were not the converts of the “Apostle of the Gentiles” (Romans 15:20). Paul had not yet visited them at the time he wrote his great letter in a.d. 57-58.

There was a large Jewish population in Rome. Probably as a result of controversy between Jews and Jewish Christians, the Emperor Claudius expelled all Jews from Rome in 49-50 A.D. Suetonius the historian says that the expulsion was due to disturbances in the city “caused by the certain Chrestus” [Christ]. Perhaps many came back after Claudius’s death in 54 A.D. Paul’s letter was addressed to a Church with members from Jewish and Gentile backgrounds.

In July of 64 A.D., more than half of Rome was destroyed by fire. Rumor blamed the tragedy on Nero, who wanted to enlarge his palace. He shifted the blame by accusing the Christians. According to the historian Tacitus, a “great multitude” of Christians was put to death because of their “hatred of the human race.” Peter and Paul were probably among the victims.

Threatened by an army revolt and condemned to death by the senate, Nero committed suicide in 68 A.D. at the age of 31.